There’s a Facebook meme going around that says “LIKE if you think 10 years ago were the 1990s.”  I’ve never “LIKED” it, but it is hard to believe that 2002 was an entire decade ago.  See, in 2002, that was the hey-day of being a Mets fan.  At least in my eyes.  The team sucked, but usually in those years, the **true** fan comes out, and not the Johnny Come Lately (that you see all the time in October in the Bronx).

It was then that I met Frank, Brian, Tommy, Kim and the rest of the Woodside crew.  Those were the days of Section 22 in the Mezzanine which was absolute mayhem on the weekends.  There was Roger and his crew from Bensonhurst, and there was Richie and his “YEEEEEEEEEEE HAAAAAAAAWWWWS” at inappropriate times.

It was then that I knew I had a gift.  I had a gift of attracting the outside element, the misfits, the people who made being a Mets fan not only worth it, but the very iota of BEING a Mets fan.

I also knew that I had a gift of listening.  Like Frasier Crane would tell his callers, I listened all right.  I listened to when Richie said, “Hey! We’re down 6-0 in the bottom of the 5th to the Pirates…we got ’em RIGHT WHERE WE WANT ‘EM.”  Or when Tommy said, ” Hey look at this Mike Piazza ‘jersey’.  I might go home dry my dishes with it.”

It was also the last Saturday home game, when I had my Saturday plan with Pop in Section 22.   It was a chilly night, and it was the Mets winter cap night, so it was appropriate that most of us put the hats on.  When I suggested we wear them to the Jets games we planned on attending, Frank said, “Yeah the wint-uh Mets caps for our wint-uh Mets games.”  (Wint-uh Mets meaning the Jets).

I don’t remember who the Mets played that game, and not sure I remember much of the game.  I do know it was boring and by the 6th inning, we were talking about going to Donovan’s, a pub off the 7 train in Woodside (where the crew was from).  When the game just got unbearable to watch, Frank stood up and said, “FUCK THESE GUYS!  I’m going to Donovan’s.  Who’s comin’?”

Thus spawning a decade of me saying, “Fuck these guys, I’m going to Donovan’s.”

Perhaps it was fitting that it was the last home game of the 2012 season yesterday at CitiField, and I took it upon myself to call it “group therapy” (you know, us sadomasochists of Mets fans…we like to be tortured which I’m sure is some kind of psychological ailment…all I know is that most of us suffer from some form of post-traumatic Mets disorder).

Perhaps it’s more appropriate that after the last game of the year, my husband asked, “So…feel like going to Donovan’s?”

Those who do not learn from history are doomed to repeat it.  But 2012 differs in so many ways from previous years of futility.

The last two seasons, the Mets regular season ended at home.  In 2010, the year was just beyond awful but I won a game-used David Wright jersey after the game, so all was forgiven…well, almost all, since I had to witness the Oliver Perez white flag waving when they brought him into a tie game in the 14th inning.

Last year was a weekday day game, but most of the people in the house were there to give Jose Reyes a boost.  If you got caught in traffic (like many people did yesterday), if you were standing in the Shake Shack line, if you were walking to your seats, chances are…you could have missed Reyes’ last at-bat.  He rewarded our ovation by deciding to leave.

More often than not, I am sad to see a season end.  That’s not to say I didn’t feel that way this year, but it’s just different.  We had another weekday day game this year, but the Mets still have games to finish.  Last year, it was mostly bloggers in the stands.  I pretty much knew everyone who was there in 2011.  This year, I knew many people who were there, but as Steve Keane said today at Kranepool Society, “Closing day is where you separate the posers from the die hards.”

I took it upon myself to realize that what we needed was catharsis, a group therapy session to talk about the season and to share how we felt.  I jinxed myself because the other day, I mentioned that whenever I wear my Rangers colors, I get many comments.  But when I wear my baseball or football teams, no one says a word.  Yesterday, everyone was asking my opinion on David Wright or RA Dickey (should they stay? should they go?).  I guess because I wore that game-used jersey that I won two years ago to the game that someone might have considered me some kind of authority.  Honestly, I didn’t want to think about it.  I sat with Kerel from On The Black and Ed Marcus from Real Dirty Mets at the Apple tailgate (well, the pre-tailgate since most people showed up late due to an accident on the Hutchinson Parkway), before realizing I was drinking beer out of a bottle, no brown bag or any attempt to cover it up.  I said, “Wow, I’m talking to you guys like I’m sitting on my living room couch.”

Group therapy.  We don’t know how to process our feelings so we just go to the games to deal with them.  Anger.  Sadness.  Denial.  Most stages of grief, you name it, Mets fans have been there.

Sure we had some acceptance going on with the picture above, including new and old Twitter friends (that I really met for the first time) including Terence and THE Sean Kenny, a fellow writer from Metsmerized Online, whom we actually grabbed breakfast with before heading to the game (turns out we live in the same neighborhood).  And some old, like Kerel and Mediagoon and Metstradamus and Steve and Enzo.   And yes, there was some denial going on, as the Daily Stache was going to say goodbye to a big part of their site identity…uh…the “stache,” Keith Hernandez’s infamous one that has been as synonymous as the Mets are with 1986.

The energy going in was a celebration.  A celebration of a year that probably raised our expectations at some points but for the most part, met what most of us thought the team was capable of.  We were there to celebrate our future — David Wright will be the reigning hits leader in Mets history starting 2013 — and the present — R.A. Dickey and his amazeballs season.

Throughout the game, there were more to meet.  There was Sharon and Kevin and Judi and PAC Lady and Greg from Faith and Fear.  There was Damus and Stache and Kranepool Society and so many of The 7 Line army representatives.   And most of all, we said fare the well to our Richie till next season, who was always good to buy us a beer or two at the games this season (this game was no exception).

I tried to remember everyone I saw.  So apologies if I forgot about our interaction.

But mostly, we were there to see the Mets first 20-game winner in 22 seasons.  Many of the topics discussed in our group therapy were centered around keeping Wright or Dickey around.  Honestly, I didn’t want to talk about the future.  It’s scary enough being a Mets fan.  The future is sometimes too hard to contemplate.  Why not enjoy the energy of now, the energy surrounding R.A. Dickey’s massive 2012 season?

In a year that was an overall underachievement, there were so many stories to feel good about.  The legend of R.A. Dickey is one that is part Dickey, but all Mets.  Anyone could have been a 20-game winner (well, okay, maybe NOT anyone, but you get my point.  I hope).  Robert Allen Dickey, journeyman pitcher he may have been, is one of us.  He’s a guy riddled with quirks, is cerebral and probably is the most critical thinking of the athletes we know.

Even the bombastic Mets fans…tend to know their shit.  And those all showed up for closing day 2012. 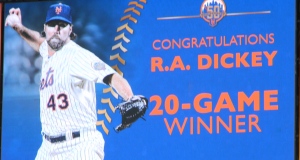 I won’t go into specifics.  We all know how the game started and ended, even with some late inning hiccups by Jon Rauch (whom I actually really liked in the ‘pen this year!), but mostly, Robert Allen Parnell came in and saved the day for Robert Allen Dickey.  Robert Allen Dickey, 20-game winner for 2012 (and hopefully 21 game winner by next week). Cy Young Award candidate.  Mets fan favorite.

Don’t be fooled: Mets fans were there to bid farewell to the 2012 season.  They were also there to celebrate the guy we can all rally around, and that’s R.A. Dickey.

Kranepool Society turned to me at one point and said, “This team adds years to my life.”  It’s true.  We age in dog years too.

Yet, at the end of the day, when the game was over and we all walked out on a high from the outing…one thing hit us then.

The realization that the season was no more.  At home, at least.  Sure, the Mets are on the road and we can at least watch them on television.  But we won’t be seeing them at home till 2013.

In a way that’s good.  End on the high note.  See the good game, the game every single one of us deserved to see this year at home.

And even as I joked around earlier this year, Johan Santana’s no-hitter wasn’t even really the highlight of the year.  I’m sure to some, it was.  To us though, the season has been all about Dickey. 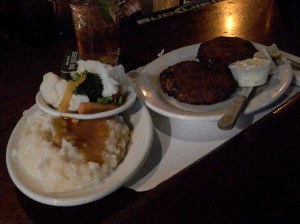 When we got out of the park, we headed to Woodside to have our celebratory meal.  Usually, I opt for the “best burger in New York City,” Donovan’s Pub’s specialty.  But they did a menu change a few months ago…they eliminated some of my favorites including their crab cake platter.

Sigh.  I really love them there.

That was also the last meal I had there post-2002 Saturday’s game.

That was all she wrote.

In the past 10 years as a Mets fan, I’ve come full circle.  Shea Stadium is no longer with us, but the true die-hards, the real fans are still coming to CitiField.  We may miss Shea every day, but we’re moving onto the acceptance phase.

The 2002 season was littered with disappointment with many more lows than highs.  As for 2012, sure the season could have been better team wise but we go for the defining moments that make being a Mets fan a METS fan.

And by listening to the fans, I’ve caught more catch-phrases or understand what makes a Mets fan tick.  And who knows — if I didn’t listen to Woodside Frank all those  years ago, I’d have never heard of Donovan’s Pub.  And to me, that’s the greatest travesty.

So thank you, fans.  Thank you for giving me material all these years, and when the team doesn’t give me much reason to cheer, you give me reason to keep coming back and related to this band of merry misfits.