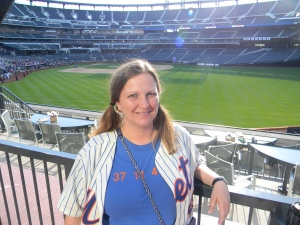 Another closing day has come and gone.  It used to be that days leading up to it were nostalgic.  Almost like a wake.  We got together to remember.  We got together to forget.  (This phenomenon is known as post-traumatic Mets disorder).  Then closing day comes and goes.  Sometimes they are happy.  Sometimes, they are sad.  More often than not, it’s a bittersweet event.

Sure, the Mets put us through a lot of shit in a season.  They’ve certainly given us a fair share of feces in the last six/seven years at least.  But we keep coming back every Opening Day.  But as Greg Prince once said, “Every poseur wants to be at Opening Day. Closing Day is a rite for the secret society of baseball fanatics.” Faith and Fear in Flushing

This Closing Day was special for Mets fans though.  It showed that on a deeper level, we all still care.  We care very deeply for the team that we’ve taken as our own, and has given us personality.  I often say, I’d be really boring if it wasn’t for being a Mets fan.  I don’t know is anything really compares.  Perhaps I had a life changing experience with football and soccer fans in Seattle (those people are CRAZY). Yet, nothing else in my life compares to being a Mets fan.  I made some of the best friends I’ve ever had in my life.  I met my husband through Mets blogging.

Greg and Jason may say that being a fan in Flushing can give you both faith and fear.  It’s a delicate balance for sure with us.  I suppose this is the root of all post-traumatic Mets disorder.  We “gotta believe,” but it’s “always the Mets.”  Faith.  Fear.

I had bought two in 2006, when I was in a relationship.  I got his in a bad breakup, and I have two FAFIF shirts, that showcase retired numbers in Mets fandom.  By the hardcore Faith and Fearless, these shirts have showed up in several countries, and around the U.S.  I wore mine to Texas when we ambushed Howie Rose in the radio booth.  I wore it on the day I met Greg Prince in 2007, which was a total accident.  (We ran into each other a lot that week.  Sure you can search his archives for that).

Sunday should have seen 31.  My shirt should have been outdated.  But I wore it to make a statement, that the number should be retired pre-emptively.  I honored the present with my Niese 49 jersey.  I wore numbers that are retired with the hope that another number will be with it soon.

Fans still cared.  It turns out Mike Piazza still cares.  He came.  He spoke.  He still is a rock n’ roll bad ass, something I realize has been sorely missing since his departure in 2005.

Here’s the thing with post-traumatic Mets disorder.  Or the Faith and Fear disorder that effects us all.  There is a great amount of self-loathing involved.  We get a hard-working player and hitter like Daniel Murphy, in the vein of fan favorite Edgardo Alfonzo, and vocal minority wants him gone.  Travis d’Arnaud has a lackluster beginning, and people are already clamoring to trade him.

It also does not allow us to appreciate what we do have when it’s right in front of us.

I freely admit that I did not fully appreciate him while he was on the team.  Only after he was gone, did I miss him.

And this is totally my loss.  Today, you will not see a bigger defender of Mike Piazza than me.  He should not only be in Cooperstown, he should be in there as a Met.  He shouldn’t just have his plaque in the Mets Hall of Fame and Museum, he needs to have his number on the wall in left field and a section of the park named after him (I vote “The Piazza” in the upper deck promenade food court, behind home plate, a nod to his monster home runs, and his position).

I’m through with the self-loathing part of being a fan.  Yes, it makes me funny, and I do love curse words.  But let me reserve the bulk of those for Cody Ross, Shane Victorino and hockey players, like Ovechkin and Crosby.  (Also for the New York Rangers.  Those assholes deserve all my angst).

And I implore you all to do the same.  It’s okay to want and have nice things.  See, Travis d’Arnaud might not be a hitter like Mike Piazza.  But where Piazza lacked as a defensive catcher, we can appreciate in d’Arnaud.  There was a play over the weekend where d’Arnaud’s position disallowed a run to score.  Sure, Juan Lagares’ arm helped (at least, I think he was the one with the assist).  Travis d’Arnaud knew instinctively where to block the runner.

So Sunday was hopeful.  I was relieved to see the season end.  With all the extra innings, the delays, even all the nine inning games that took FOREVAR to finish…I think it took a toll on me, as a spectator.  I can only imagine what it did to the players.  As Lou Brown once said, even tough guys get sprains.  Saturday’s game was one that did me in.

As my husband said, this is what it would look like when the Mets are good. 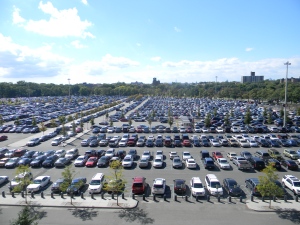 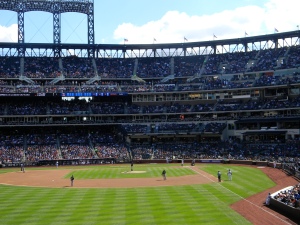 A full parking lot.  A full house.  It was like the ghosts of Shea were brought to us all over again.

The Mets sent the Shea Faithful vibe home with a win.  The self-loathing part of me would say, a win on closing day in 2007 or 2008 would have or could have changed the trajectory of this team dramatically.

But then, we wouldn’t have the faith and the hope that 2014 and beyond will provide better times to come.

I said goodbye to some friends.  We joked around about the offseason, and how we are boring, but we all wait.  We wait.  We stare out the window, and we wait for spring.

For the first time in a long time, Greg and Jason, I have faith.  I have no fears, but faith in the team for 2014.  I was happy to see 2013 end, but like many on closing day, it’s not without some kind of regret or bittersweet feeling.  I feel like we’re finally being honored for our unwavering faith to this team.  And the best is yet to come.