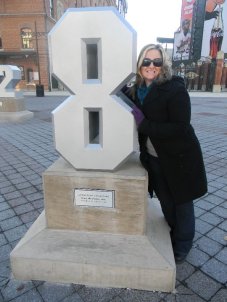 The Number Eight is more than just Gary Carter to the Coop. It’s also for Cal Ripken, who is honored at Camden Yards.

I’ve been a fan of Baltimore for years. No, not the teams, but Charm City itself.

I was introduced to the Inner Harbor while it was undergoing its renaissance, and I loved the functionality of it instantly. A big part of its revitalization was the construction of Camden Yards, where the Orioles play. Way back when, the Orioles played in no-man’s land at a place called Memorial Stadium. The O’s moved and thus began a string of new retro-fitted stadiums in MLB.

I also had a big love affair with Cal Ripken since the 1980s, and even drove all the way down to Baltimore for his retirement game.

Over the years, like most of the country though, Baltimore has been hit with some real estate drama. Many empty store fronts, ghost towns of shopping centers, and closed restaurants. I just read the other day that a restaurant I’ve known since I started going there, closed after 80 years of operation.

But Camden Yards has been a boon for better or worse. But not for the Orioles…usually the visiting teams. I remember so many Yankee fans asking me for advice on where to stay, what to do in the area. See, I always (still do) talk Charm City up, as a place for a quick getaway for the weekend. It’s cheap, easy, and you can get good food and drinks.

Yet, I’ve been pleasantly surprised by the turn around for a team that has a piece of my heart for reasons outside of my other team. When they got off to a rollicking start this year, I didn’t think much of it. And even as they still held strong after the All-Star Break.

Now they’ve taken two out of three from the Yankees. And with a win today and a loss by the Yankees, they are only one game out.

But that’s not why I’m writing about a team not my own. No, I want to ask where the HELL are the fans? The passionate and fun Baltimore Orioles’ fans?

I guess they’ve fallen by the wayside like many other fan bases that have been betrayed by the ownership or management.

But like most of Baltimore or the surrounding areas of Maryland, I would say it’s just art imitating life. And to me, that’s sad.

Today, the O’s are two games out of first in the AL East. Sure the Rays are breathing down their neck. Sure, the Yankees can easily turn things on. And certainly there’s a lot of competition in the whole Wild Card business.

According to Dan Duquette, television ratings are higher than they have been – that could mean more people are staying at home rather than going to the games themselves, though according to the same article, attendance is at a five-year high. When I saw the attendance at a weekday day game this week at Camden Yards, though, I have to say that B-More fans should be ashamed of themselves. Next weekend will be a crucial series against the Yankees, and I can pretty much guess that a majority of the fans making the trip will be Yankees fans (business as usual, it’s generally like that since it’s a close trip).

Yes, Baltimore may be a downtrodden area, but like Camden Yards did 20 years ago when it first opened can once again help the Charm City rise from the ashes. With the help of a stronger Orioles’ team and the support of their fans going and pumping dollars into their economy.

Today, the O’s are one game out of first in the AL East. Sure the Rays are breathing down their neck. Sure, the Yankees can easily turn things on. And certainly there’s a lot of competition in the whole Wild Card business.

This whole season could be a very special one, and they’re all missing it. A shame, really.