I know it’s been like a week since Peyton Manning and the Indianapolis Colts announced they have agreed that after a storied career with the franchise, Manning would no longer be a Colt.  It’s sad, since he’s been very successful, but he’s also been what we call “hurt” and at the end of the day, we know this is a business.

Yet, I had people asking me to weigh in on it.  I thought since I’ve said it on Twitter that my position is clear on the idea of Peyton Manning on the Jets.  I mean, I am a Jets fan first, but there are players who deserve my respect, and I always respected the shit out of Peyton.  Thought it was a shame that if his career were to end, it would be this way and not via a retirement road show like he deserves.  That’s about the extent of it.

Meaning, don’t even bother asking me if I want him on my team.  The short answer is no.

The long answer – are you fucking crazy? Why the hell would he be a good fit for the Jets AT ALL in this lifetime?  Like, I don’t know why this is even a discussion.  Hell-to-the-NO is more like it for the long answer.

Besides, this was written on Friday afternoon, and by Friday evening, it was announced that the Jets had extended Mark Sanchez with a three-year deal.  So a lot of this is moot now.

Yet, I had some people try to argue with me why it would be a good idea for Peyton Manning to be a Jet.  I listened, since I like to think of myself as a compassionate version of Mike Francesa (ok, that’s a bad example, since I’m comparing myself to a know-nothing blowhard radio guy), but I don’t want to be abrupt or condescending.  If someone brings up a good point to me, I’ll acknowledge it but tell people how I feel afterwards.

Someone suggested to me that Peyton could help the Jets bring home a Super Bowl.  And if I eat broccoli today, I could take a dump tomorrow.  Look, maybe five years ago Peyton could win a Super Bowl in New York.  With his injury history and obvious deterioration, it’s not the best idea, especially when we already have Sanchez here.  Hiccups and all, Sanchez is our guy, as I discussed with Jon Presser on my podcast a few weeks ago.  Even Eli Manning has two Super Bowl titles, and he led the league in interceptions not more than two years ago!

I know Peyton Manning will end up somewhere.  But if anyone merely suggests that he could cure what ills the New York Jets at this point, they’re sorely mistaken.  Like, didn’t we just go through that mess with Brett Far-ver-uh in 2008?

Here’s where I think Peyton would be a good fit:

I know it’s a longshot, but you come here for my opinion, and I’m gonna give it to you.  I like and respect Peyton Manning, but to suggest he could do better or be better than what we have is a massive overstatement.  Sanchez is our guy and the sooner we realize that, the better off we’ll all be (and the Jets took care of that for us today).  But, you know, best of luck to Peyton on his job search.  He’ll be employed in no time.

Plus, I wouldn’t want that Sausage Race looking mother fucker on my team anyway. 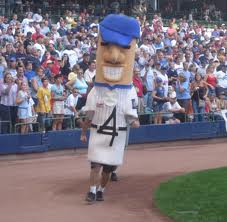