That “WHEW” you just heard came from the collective Jets fan base. Notice that you didn’t hear anything about Brian Schottenheimer or the defense or Mark Sanchez either.  I guess it’s easy to forget all that stuff that Monday Morning Quarterbacks like to discuss, especially when they win.

If you had listened to the media prior to the game, after Rex Ryan had off-the-cuff said something to the effect of, he had interviewed for Norv Turner’s job in 2007, but also made a little dig about their lack of championships in that time period.

“Well, I think I would have had a couple rings. I’m telling you, those teams were loaded.“

Sigh.  I mean, Rex couldn’t have possibly said something that was taken out of context, nor something that would potentially make him look bad.  He hasn’t exactly won anything with the Jets, but then his team has made it to the Conference Championship two years in a row, mostly on guts and the back of a young quarterback.  Not too shabby, but of course the media ran all over it.

The Jets didn’t have much of a chance against the real-deal-holy-feel Chargers, who got off to a 4-1 start this season, while the Jets infamously lost three in a row on the road.  The Jets are now undefeated at home.  Of course, in the first drive of the game, it seemed like it was practically right after kickoff, Chargers returned a “fumble” for a TD.

I had a bad migraine at that point, and I told my husband, “I’m going out for coffee.  If this team expects me to watch this crap, I need to have caffeine.”  When I returned, things didn’t sound much better.  Nick Mangold had a penalty that nullified what should have been a clean TD. This would be the theme of the day, lots of flags that made the game almost painful to watch at times. 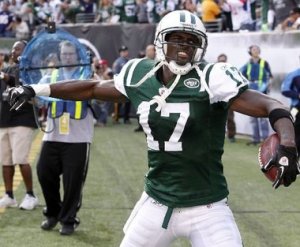 It seemed like the Jets were predestined to lose, especially with all the experts coming out against them.  After all, with Rex doing a lot of talking, the only game they’ve won in four weeks being against the Dolphins, and a bunch of pissed off Charger players who thought they were being dissed, it looked so.  Of course, it was then I remembered this was the Jets, and they never make anything easy (kind of like my other two teams), and our ace in the hole was Plaxico Burress.  I happen to like Burress a lot.  I’m happy he’s in the Jets’ end zone when it matters (but mostly yesterday).

The Jets won a game against a “legit” team, though, and it seems people still don’t want to give them any credit.  I am a fan, they frustrate me to no end.  They may be a little rough around the edges in some places, but it should not surprise any of us to see that they had a bit of a slow start.

There was no cap-tipping or rather helmet-tipping to the Jets by the Chargers, who had a bunch of BMW (bitchin’-moanin’-whinin’) going on after the game.  For one, I was just as annoyed with all the flags (even those in the Jets’ favor), but it’s nothing but sour grapes when San Diego cornerback Quentin Jammer says that the refs gave the Jets the game.  This is a team most others want to beat, and you couldn’t.  I get it, Jammer.

That’s not to say that bad calls went both ways against both teams.  I thought they were all getting a little ridiculous.  Yet, each Jets win is discounted by some “factor.”  A game is a game, and a win is a win.  People were ready to discount the win against the Dolphins on Monday simply because they hadn’t won a game this season.  Now, it’s because of the calling.  Even though they won, they can’t win.  Rex Ryan probably had the last laugh here.

By the way, what the hell was Philip Rivers doing at the end of the game there?  I swear, he wasn’t even trying.  It looked like at points, Norv Turner was going to have a conniption, but mostly, it worked out to our favor.  I was surprised that even though it looked unlikely, he didn’t even try to really keep the team in the game at the end, even throwing it out of bounds.  I think that was the last play of the game, if I’m not mistaken.  Ryan alluded that he expected to see the Chargers again in the postseason, and it’s quite a possible scenario.  Maybe the Chargers were saving their energy for that game, if it comes to that?  I suppose time will tell.