You all know me.

I am not a Tim Tebow aficionado.  I probably make more excuses for Mark Travis John Sanchez than his own mother (or worse, his coach Rex Ryan).  Yet, I’m pretty much done with him too.

But I have to say, I feel bad for Tebow.  He did not deserve to be a part of this green shit show this year, at all.

He has served as a pawn in a clueless management that seeks to win headlines over actual games.

He has served as an icon for a hype-driven market.

But most of all, it’s one that has been completely unfair to him.

Mark Sanchez clearly cannot handle whatever it is he can’t handle (the voices in his head telling him he sucks, or the “death threats” he received on Twitter after Monday night’s loss).

Tebow did not deserve what he’s gotten from the Jets, which is a big gigantic ZERO.  Nothin’.  A turd, if you will.  A big fat smelly turd.

Do I like Tebow?  Look, I’ll be the first to say he’s all hype and a self-promoting media marketing machine.  Does that mean I think he’s a bad person?  Quite the contrary.  I don’t believe he’s a bad guy at all.  And he’s certainly not the bad guy in this story.

What did he do to deserve the treatment that he’s gotten from the Jets?  I certainly think at age 25 it’s unfair to pigeonhole him as “finished,” as the Washington Post said today.

First, John Elway made his role obsolete by “going for it” with Peyton “I-Look-Like-A-Milwaukee-Racing-Sausage” Manning when Manning’s job was obsolete in Indianapolis.  This was AFTER Tebow had given the Denver Broncos the chutzpah to make it in the playoffs last year.

Second, what the frigg was Mike Tannenbaum thinking?  Whatever warts and all Rex Ryan has as head coach, clearly he is Mark Sanchez’s number one supporter.  I’m sure it was with a heavy heart he decided to go with Greg McElroy in this week’s game, rather than Sanchez or Tebow for that matter.

Which leads me to this.  I’m not a Tebow fan, but I was of the frame of mind that if he was capable, he should certainly be in there, at least when Sanchez was floundering.  Which is entirely possible, as we’ve seen.  Talk about mixed messages.  First, Sanchez was given an extension, THEN Tebow was traded to the Jets.  What the hell were they thinking?  I don’t even know if THEY know what they were thinking!

All at the expense of a man’s career.  Beautiful.

Look.  You all know I am a Mets fan, right?  (If not, whose blog have YOU been reading??)  It reminds me of the situation with Aaron Heilman (before you laugh, I happen to have some Stockholm Syndrome going on with him, deal with it).  Remember he was a starter?  Typical Mets story when they rush a prospect, only to see him fail, then not know what to do with him.  They brought him back for a start, and he rewards them with a shutout one-hitter.  How do they pay him back?  By putting him in the bullpen, a role he was NOT suited for, with the carrot dangle of “If you do well, you’ll be a starter again.”  Well, guess what?  He becomes too valuable in the ‘pen, which didn’t say much because the Mets notoriously NEVER have a good bullpen.  Then what happens?  Heilman ends up blowing some significant games, and cannot gain the confidence coming into a game.

Sure, I can call him a pussy, but the moral of the story is, just another one biting the dust of Mets mismanagement when they don’t know what the hell to do with a player.

I can adapt that story to the Jets.  Why ruin a team when you can ruin the career of a decent guy who is talented and can succeed and do so much more?

Look no further than Tim Tebow.

As I’ve said, I am no Tebow fan, but he does not deserve this smear of his young uprising profession this soon in his career.  Shame on the Jets for making him a pawn in this situation. 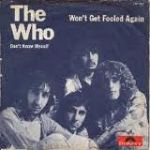 Perhaps The Who’s “Won’t Get Fooled Again” is one of the most plagiarized songs in sports.  If you think about it, the whole “Meet the old boss/same as the new boss” line gets rehashed over and over…and over and over…and over some more, and once again, in the sports lexicon.  No matter what sport, team or pro/amateur, whatever, we can always use that line to describe how a team we follow has performed.

I promised myself never to do that, since I believe it to be cliche.  Yet, I haven’t weighed in on the whole Jets performance at the end of the season for that very reason: it’s a cliche.  You have a semi-new “boss” who has talked a big game and practically predicted a championship  each year since his hiring.  You have a young stud hotshot whose hopes for the future have been pinned upon.  You have a bunch of mercenaries playing on a team that really just care about personal performance, but aren’t “team” guys.

Factor in a New York (“big market”) team facing a Miami (“small market”) team on the last game of the season with playoff implications for the big team and what do you have?  A recipe for disaster.

You may think I’m talking about the Jets, but I’m not entirely.  You see, I’ve read this story before.  It’s happened to the Mets as well.

I’ve often argued that 2006 for the Mets was the aberration: the year that should have never happened.  Yet, at the time, I was drinking the Kool-Aid like everyone else, or rather, I was just enjoying the time and place in front of me.  But who believed they wouldn’t at least *MAKE* the playoffs that year?  I can say until I’m blue in the face that the last series of 2007 for the baseball Mets was not the killer — we could point to any series lost against the Phillies after All-Star Break that year, not to mention the series before against the Washington Nationals where if they only won just ONE goddamn game, we wouldn’t be even blinking an eye about their floundering now — but rather it was indicative of the whole season.  The giant falls, and we’re not talking baseball or football giant, we’re talking a big market team, no matter what the pro sport.

But look at the Jets.  A team that simply got too big for its britches.  A team that believed everything its big talking coach told them, a team that believed its young stud quarterback wasn’t actually overrated.  Hey, you know what, I don’t apologize for liking Mark Sanchez.  He’s young, and may even be successful without the fish bowl of New York media.  But I’ve gotten attacked on Twitter for saying Eli Manning was overrated (so the fuck what about a Super Bowl title), but I was also saying that the Jets aren’t much better in that department.

Then look at how the Mets floundered in 2007.  I’ve often said the denouement of that quasi-dynasty was Carlos Delgado.  And he was barely a Met.  Yet, he came to the team, and they rode his confidence.  Yet, the second he started to slump, so did the team right behind him.  Perhaps Billy Wagner put it best when he looked to his locker after a game in 2008 and said, “f**kin shocker” in response to being interviewed in a game where he didn’t even play.

Substitute Santonio Holmes on the Jets for Carlos Delgado on the Mets, and you have yourself a good comparison. I have to admit that I like Holmes, and even past tense, especially when he was on the Steelers (for some reason, I have a lot of friends who are Steelers fans).  He’s been criticized by Joe Namath, but also by his own teammate LaDainian Tomlinson.  Injured reserve rookie QB Greg McElroy didn’t name names, but didn’t really have to when he said that the Jets locker room was infiltrated by selfish personalities.

If you look back to the reasons why the Mets faltered late in the season in both 2007 and 2008, there were rumors that a faction led by Carlos Delgado kind of undermined their “boss” Willie Randolph.  To be honest, I was not a fan of Willie Randolph, but it seemed like a bit of a longshot that Delgado or anyone on the team woud have tanked on purpose just to get him fired.  On the flip side, there was almost a direct correlation to the team doing better (especially specific players) after Randolph’s midnight firing.

So does this mean that the rumors were true — that Holmes, among others, were just tanking to get Brian Schottenheimer fired?  If that’s the case, then fuck ’em, these are professionals who should be playing to win.  Not lose to spite a coach they are not fond of IF IN FACT that is the case.  Yet, it’s doubly wrong and implies that Holmes, a team captain, wasn’t even trying for whatever reason, mostly selfish.

Back after the 2006 season, the Mets came out of nowhere to come within a game of making the World Series.  Each year after that, their performance has gotten worse and worse, and more embarrassing by the season.  Now, they are almost in a rebuild mode (a hybrid of cutting ties with “dead weight” and ties to previous losing seasons, and letting the young guys play, whether they win or lose).  Taking a cue from the public service announcement that “It Gets Better.”  For the Mets, though, it’s gotten progressively worse, and should continue to get worse before it ever gets better.

In 2007 and 2008, the Mets had respective season-ending series against the Florida (Now “Miami”) Marlins that could have swayed their playoff position.  I’ve argued that there were games each season that they SHOULD HAVE won and COULD HAVE won but DID NOT.  So when those series were lost, yes, it sucked, but I just took it.  The same goes for this big market football team, losing to a subpar team located in Miami, in a game where a win could have changed everything.  By the same token, a win anywhere else in the preceding three weeks could have changed everything too.

I root for three major New York teams — the Mets, the Jets and the Rangers.  Each one incompetent in their own special way.  But the Mets and Jets have more similarities than I care to admit.  And yet, I have to wonder if after a taste of almost success in making it to the conference championship could have been just enough of a taste for a team that didn’t make it quite as far as they should have.

The Jets are in a bind.  They believed their own hype and became too big for their britches and then what happens? Players start to quit.  And it becomes a bigger story than the team itself.  They lose games they should be winning by considerable margins.  But that’s just it: THE ENTIRE FUCKING SEASON WAS LIKE THAT.  I could go back to when they started 2-3 after losing three straight on the road.  Winning just ONE of those road games would have made a difference.  The shitshow back in November after Thanksgiving.  All in all, the Jets have no one to blame but themselves, since it’s a team loss.  But if you are having individual players making individual decisions about how the team should operate…then expect more of the same, as long as Mark Sanchez, whipping boy du jour, is around.