Remember the anticipation for Christmas morning when you were a kid?  The excitement leading up to the day, making your wish list, going to see Santa, even going to bed on Christmas eve…all with the knowledge that when you wake up, it’s the most exciting day of your childhood.  Till next year of course.

Then when you are an adult…life just kind of flies past you, ya know?

I often say that as an adult, my year officially begins on baseball’s Opening Day.  Each year, I’d wake up with anticipation every day leading up to whatever that arbitrary date would be.  From the last out of the World Series, it really didn’t matter if my “winter sports” teams were doing well.  Baseball took the prize, hands down.

Contrary to what TS Eliot claimed about April, March seemed to be the cruelest month to me, at least.  Hockey would be gearing up for the playoffs, but baseball was also starting.  It didn’t matter how the Rangers were doing: it always took a back seat to baseball season.

This year, Mets’ opening day was to be Thursday, March 26th.  I knew once the season started, and I did my baseball trips, before I knew it…October would be here.

Now, the start of baseball is a continuum.  Ergo, there is no start.

And if you feel anything like me, you feel lost, in more ways than one.

I won’t lie: 2020 has been a weird fuckin year, sports-wise.  As if January wasn’t the longest month EVER, as Sunday, January 26th unfolded, the sports (and the entire) world learned we lost Kobe Bryant, plus his daughter Gianna.  While I can’t say I was the biggest Bryant fan, I certainly respected him and what he did for the sport.  That said, I was glued to the TV and my phone that day, to learn about what happened.  It was other worldly.  I thought, no way does any news top this one.  It was sad.  It was tragic.  I really don’t know if anything was going to top feeling what we felt when we found out Kobe Bryant ceased to exist.  Once his and Gianna’s life celebration happened on February 24th…I thought, maybe we can move on.  Seemed unbelievable, but we’ve done that before.

The universe had other plans, however.

For those of you just getting acquainted with Gal For All Seasons, you will know that I am a big New York Rangers fan.  While I didn’t expect much of the team this season, I attended their opening night in October (another growing tradition in my household), and I expected…I don’t know…something special this year.  Maybe the team wasn’t going to make the playoffs, but they were going to make things fun.

Boy.  Did I get more than I bargained for.

Mika Fucking Zibanejad.  Along with Artemi Panarin, we were getting an exciting scoring opportunity each time they took the ice.  I could live to be 100 years old, and not see another game like the one Mika Zibanejad had on March 5th.  The biggest drama we thought we had this year was wondering if Henrik Lundqvist would ever play again…and that Igor Shesterkin was making a quick name for himself in the few games he played before doing the Duaner Sanchez special (most Post-Traumatic Mets Disorder folks know getting into a car after a successful run is never a good thing).

Hard to believe that shit wasn’t even a month ago. 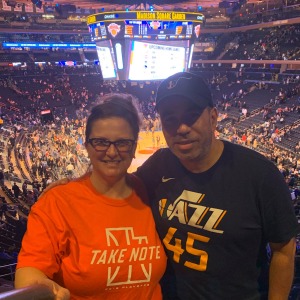 The last live sporting event I attended in 2020 was when the Utah Jazz played the New York Knicks on Wednesday, March 4th.  The weirdest thing of the evening, to me anyway, was to attend a non-Rangers sporting event at Madison Square Garden.

Yet, the weirdest shit happened after that night, something that was beyond anything I could have ever imagined.  The weirdest shit was my connection to the Utah Jazz, and the last sporting event congregated…before the end of the world.

A week later, Jazz star center Rudy Gobert tested positive for COVID-19, the strain of coronavirus that is wreaking so much havoc not only at home, personally and professionally for me at least…but worldwide.  Shortly after this diagnosis, NBA pulled the plug on the season, for now at least.  We found out a teammate, and fellow Mets fan, Donovan Mitchell, tested positive.  Along with several other players, even fans.  That same day, the WHO had declared COVID 19 a pandemic.

Then, the shoe continued to drop.  NHL paused its season.  MLB pulled out of spring training and doesn’t appear to have games on the docket till at least May (and at this point…that seems too soon, with California and New York state going under stay-at-home order immediately).

It seems like a hundred years ago when I was at that basketball game (the second professional hoops game I’d ever attended, believe it or not).  I convinced the husbo to go to that game because “We never see your team, the Jazz, play when they come to New York.” (And full disclosure: I was a huge Jazz fan in the 90s, when John Stockton and Karl Malone were kicking ass together).

March 4th feels like it was forever ago.  But it was just over two weeks.

Now will baseball season start in May?  Possibly beyond?  When I want time to go as quickly as possible, because that means these end times will be dissipating, this last week took forever.  And seems to not want to end.  With only more and more bad and unpleasant news to hit the wires.

All of this is too painful to imagine, awful to fathom.  I realize the world is much bigger than me.  But when my world is all about the sports that help me escape the trivialities of life, a deadly virus has to have me not ignore reality in a big way.

In my dream I was drowning my sorrows
But my sorrows, they learned to swim
Surrounding me, going down on me
Spilling over the brim
Waves of regret and waves of joy
I reached out for the one I tried to destroy
You, you said you’d wait
‘Til the end of the world

Kobe Bryant’s death seems like a million years ago at this time.  I was telling a friend the other day that I thought the weirdest story in basketball this year would be his death.  However, leave it to the Utah Jazz to not only beat that, but cause a domino effect of response…we saw the ripple effects of one person testing positive for COVID 19.  Now this is a big metaphor for what the pandemic looks like world over now.
I sit home because I have to, longing for a sense of normalcy.  I sit home, because it’s the safest and right thing to do right now.  I watch my millionth episode of Man Vs Food.  I see the same episode of SVU…again.  But what I wish for is to go outside.  Longing for the Rangers to take the ice again.  Rushing home from work to take the train to Queens for a baseball game.  Anticipating next Thursday’s would-be opening day tailgate.  Leaving for our first baseball road trip.  I’ll take ANY trip, really, at this point, besides the walks to the grocery stores.
I normally sit home most evenings anyway, as this day and age provides us with a way to stay together, even if there is a separation to it.  We watch and talk about games while on our phones and social media apps.  We don’t have sports to bring us together right now.  But we are all together now, even if we are uniting separately, in our own homes.
I’ll wait till the end of the world, as Bono sang on my favorite song on my favorite album, for baseball season to start and perhaps the rest of the sports seasons to end.
But I hope the end of the world doesn’t come before I can do those things that I have taken for granted.
Loading Comments...