I’ll admit: I didn’t think it would happen.

The “it” I am referring to is, of course, the Mets bringing back Yoenis Cespedes.

I was totally against the “7/$150mm” years and dollars being bandied about.  I don’t care who the player is, I’m just not a fan of “throwing money” at a problem or just placate a bunch of loudmouth idiots (media and fans alike).  It seemed as though other teams were not only happy about that prospect, but teams that had experience with Cespedes had that thought process too… 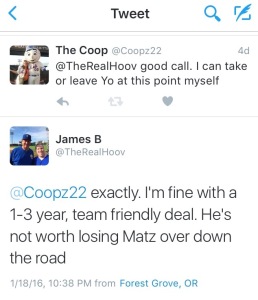 Mets fans were able to celebrate Christmas in July at the trading deadline last year, with the acquisition of Cespedes (in addition to Kelly Johnson and Juan Uribe, which were pretty decent acquisitions for us).  But what’s lost in the mix is what we *didn’t* get.  One and a half seasons of (injury prone) Carlos Gomez for Zack Wheeler and Wilmer Flores, or Jay Bruce.  I think that’s pretty fuckin awesome.

Late Friday night, as the eastern seaboard prepared for a “snow day,” what we didn’t expect was to become “YO-ed” in, as right before bed time, we got news that the Mets reacquired Yoenis Cespedes.  Sometimes stupid baseball makes me miss sleep.

I will admit…I could have taken or left Yoenis Cespedes, as I said to JB on Twitter.  Despite what the general public may think, the success the 2015 Mets had post-trade deadline is often over-correlated to acquiring Cespedes (read Mets Daddy‘s great piece on that for more info…I don’t believe the title is accurate…but the content is on the money for being impartial).  People don’t want to hear this either, despite whether or not he was playing “hurt” (he never confirmed or denied it), he didn’t come through when the team needed him in the postseason.  Yes, I realize it wasn’t just on him.  But Mets Daddy’s post does bring into the spotlight what his numbers truly brought out.  But I won’t get into all that, you will simply have to read his post to figure that out.  Besides his take on the pitching, (I won’t nitpick an otherwise great post) I couldn’t agree more that Cespedes wasn’t the be-all end-all.

I don’t know if the last few years have just left me jaded, or the fact that players I’ve legitimately wanted have faltered (see: Bay, Jason or Santana, Johan) in the limelight here.  At the end of the day, I don’t think that I truly believed he would take a win-win scenario as a contract, and would go for the “sure thing” (e.g. Money and Years).

People who know me know that I am a fan of Terry Collins and the Sandy Alderson-led “dream team” of front office professionals.  What I really love is that we are in a position where we can actually trust their judgment.  Because I have to believe that even if they are being financially prudent for the sake of the owners who don’t know shit about running a baseball (but like the perks that come along with it), Alderson really believes in what’s best for the team.  And thank goodness, he doesn’t engage with #MetsTwitter.

Here’s the thing about Cespedes though…with one fell swoop, everyone was happy.  He gets a nice dollar amount and can test the waters again next season, so he actually has incentive to play well so that he can potentially get a bigger pay day and years for the 2017 season.  We didn’t break the bank nor do we find ourselves with a backloaded contract if he does indeed wish to stay.  Those of us who strongly criticize (rightfully so) ownership sees they actually did reinvest fan spending to bring that goodwill feeling back.

But push all that other shit aside.

Let’s look at how the players actually WANT to be here.

In the 1986 Mets video An Amazin’ Era, Tug McGraw saw the decline of fan interest and the franchise as a visitor in the late 1970s.  When his teammates would say, “We have to go to New York and play…”  He would scream, “Don’t you people know how great of a town this is to play in???”

In 1983, St. Louis Cardinal Keith Hernandez cried in the shower as he found out he was traded to the lowly Mets.  A team, by the way, that won a World Championship three years after that, and an NL East pennant in five years later.

In the hot stove season going into 1985, Jesse Orosco said he jumped around in his living room once he found out all-star catcher Gary Carter was traded to the Mets in a blockbuster deal with the Montreal Expos.  In a loose paraphrase from an interview I saw him in around 2006, he said at the time, “We’re really putting this thing together.”

David Wright blasted reports that Cespedes was a “bad teammate,” and made an impassioned plea to bring him back just before the deal was finalized.

Wilmer Flores cried on the field as he thought he was traded from the only team he’s ever known.

Zack Wheeler is itching to return to pitching after his Tommy John surgery, saying he wants to be a part of this.

And Bartolo Colon is so happy, he’s doing head-shoulders-knees-and-toes in response to it…

Players want to be here. It’s not about a 24 + 1 mentality or 25 players taking 25 different cars to get home.  Hell, even Noah Syndergaard offered to be Cespedes’ roomie…AFTER the Thor family wore “Big Sexy” shirts for Christmas Eve.  For the first time in a long time, the players are there for the names on the front, not the names on the back.

As I noted on the Rising Apple report podcast on the snow day, my favorite Yoenis Cespedes moment almost had nothing to do with his individual performance.  The 2015 trade deadline also happened to kick off the heated divisional rivalry series versus the Washington Nationals.  The Friday night game was the Wilmer Flores walk off.  By Sunday’s game, though Cespedes didn’t do anything so totally dramatic himself, there was a buzz not heard in Flushing since Shea Stadium was around.  It had to do with Thor and beating the rivals and basically going on a tear and wouldn’t look back.

As a Yankee fan friend of mine said to me after that weekend, “Who the FUCK is this guy Syndergaard?  Holy shit, that kid’s for real.”  And how could any Mets fan not get the feels when Flores pumped up his Mets jersey in his walk off?

Despite my initial reservations about Cespedes, I say, why not us?  This is a team, despite what we may think of ownership, the front office, the manager, the “franchise” third baseman…we’ve got a team of supremely confident men who give zero fucks and what to finish what they started.

That’s something we can all get behind.  Including me.  Opening Day can’t get here fast enough.

And I’m not just saying that because there’s a shitload of snow on the ground.