Spending a bunch of time at baseball games during the year would have maybe tired out one person, but not this chick.  Baseball is the very heart of my being, but during the cold winter months, I need something else to spice up my life.  Football is for the short-of-attention spans…hockey is for those who like hulking men beating the crap out of each other.  There’s not as much commitment in these sports as 162 games a year hold…but there’s a commitment of its own respect and a deep passion attached to each of them.

Of course, some of my worlds interconnect or go off the beaten path during the non-baseball months.  I know that Mets, Jets and Rangers fans exist, but most of the time, they coexist. I find that I get along with most Mets fans but if they are not Jets nor Rangers fans, I’m okay with that.  I know a few Mets fans who are also Giants and Devils fans.  Or Mets fans and Islanders fans.  Hey, nobody’s perfect.  Lately, though, I’ve been intermingling with Jets or Rangers fans who are not necessarily Mets fans.

Take Saturday night…I went to my first Rangers game of the season.  I got to see my friend Conor at the Blarney Rock (one of the bartenders who never forgets a face or a…face), and I got to meet up with @Stefmara from Twitter, a die-hard Yankees and Rangers fan. 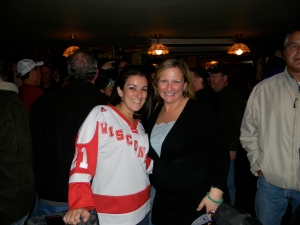 I used to have a problem with Yankees fans, but not fans like she is. She is knowledgeable, passionate and not a Johnny-Come-Lately (or Lifelong Fan*… *Since 1996).  I had a good friend of mine, Paulee Vee, who was also a big Yankees fan.  We’d argue a lot, but he said that we had similar passions.  So the passion is there, we can agree upon that…to a Mets fan though, it’s always tough to identify with 27 championships, but we’re our own little quirky universe.  I’m comfortable with that, and there’s never a reason to be ashamed.

Anyway, it turns out that besides the Rangers, we had much in common, such as people.  We were officially introduced in @AmandaRykoff‘s espnW piece on intense female fans in the New York area.  Turns out she knew a bunch of people I knew in person, and it would have only been a matter of time before we were introduced anyway.

It was easy to see how hard core Stef is.  She was raised in a hockey family, understands the nuances of it like any professional player…and even is such a Wisconsin fan, she has a Derek Stepan jersey from his days at Wisco.  I always say that baseball is my first love, but I always appreciate a dyed-in-the-wool hockey fan.

I’ll comment on the Rangers/Canadiens game I actually went to in a later post, but I will say that I went to a fight and a hockey game broke out.

The first Sunday in November is always a big day in New York City: Marathon Sunday.  It’s a day that drivers curse, and especially those who live on the Upper East Side of Manhattan can’t get around because the race route goes right up 1st Ave and down 5th Ave for several blocks.  I considered myself lucky because I’m on the West Side…except that the high-profile finish line is right by where I live.  My Mets friend Dee (the artist formerly known as Mets Writer) came in because we hadn’t seen each other in awhile, but also wanted to catch a Jets game on TV together.  When she arrived, around 11 am, the crowds from the Marathon hadn’t quite reached their apex, but once we got out of brunch it seemed like every single finisher was showing up right in my neighborhood.

The Marathon is a great part of New York City culture…just get the Hell out of the neighborhood.  Ah, I simply joke.  Because next year I will be one of those finishers…I’m sure you’ll hear a lot about it, being that I will be running for charity next year. 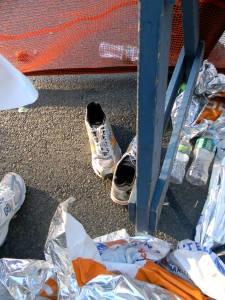 The Marathon is something I probably would have thought “I’d love to do it someday but…” and find a million excuses as to why I shouldn’t/couldn’t do it.  Yet, one of my dear Mets friends ran it last year, and it inspired me to figure out why I was holding myself back. So 2012…here I come!

Getting back to my day with Dee, she and I are both Jets fans too. We have December birthdays, and decided that we are going to treat ourselves to a Jets game in December (her first ever…it will be my third game of the season at this point).  So we took in the Jets/Bills game at Dallas BBQ.

All I know is that: the Jets won, they beat the highly-considered Bills, and that no one in the mainstream media is discounting the win. Funny, I was ready to queue up my cheeks so the naysayers could kiss my ass.  It didn’t happen though.

Yet the weekend was framed by two birthday parties…one for @laurmkor (a friend of mine who happens to be a Yankees fan) and Amanda’s, which is always going to be surrounded by sports- and beer-loving folks.

All my seasons came together this weekend, and it made me realize how fortunate I am to know these people.  Love may make the world go ’round, but sports is what keeps your relationships interesting for sure.