Between the #Mets, the #NYR and the #Seahawks, all my teams like to rip my heart out of my asshole. Know what wouldn’t do that? Knitting 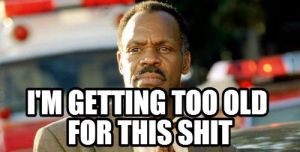 Coop is officially too old for this shit.

My life is an open book.  My sports fandom, especially if you follow me on Twitter, is worn on my sleeve.  I live and breathe (and sometimes, have a mild heart attack) with every win or loss.

Over the years, baseball has gotten easier for me to handle, mostly because I’m not expecting much from the Mets.  My reactions good or bad is usually of the, “My, what a lovely surprise” variety.

I never gave a crap about football until recently.  Even so, the stakes are a little bit higher because there are fewer games.  Even the playoffs are a one-and-done type of deal.  Don’t let the door hit ya on your way out either.

Hockey has always been a different animal for me.  The game is so fast paced, and because of that, I can be very reactionary.  My reactions are incredibly visceral.  You go crazy and cheer a goal.  You goad two goons fighting.  You boo the opposing team’s star center.

Every so often (okay, more like, every day of my life being a sports fan), I want to give it all up.  You know what? Just FUCK IT ALL, and I’ll take up a hobby that’s boring and doesn’t leave me feeling all empty inside.  Like knitting.

Well that was just a big ol shit sandwich #nyr

Last night’s shit sandwich of a game against the Washington Capitals was one of those nights that knitting really seems like a good hobby for me to take up now.  I am getting way too old for this shit.

It’s that time of the year, folks.  It’s the time of the year where two of my favorite sports collide and overlap.  Prioritizing hockey games over baseball games now, because it’s the Cup.  Rather, because…playoffs.  These games are clearly not of the One-and-Done variety like football, but the high stakes of elimination are evident in every game.  Lose one game, I am a big sour puss.  If the Rangers can firm up a victorious round before the seven games…AWESOME!  Go to seven, I will hate everything and everybody.  No offense.  I just take this time of the year very seriously. 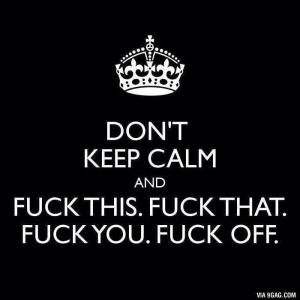 This is usually every other word that comes out of my word. Actually, just “fuck.”

I saw another game in 2012.  A year, by the way, the Rangers made it all the way to the Eastern Conference series.  They lost THAT game.

When NotGlen Sather invited me to the 2013 playoffs, I initially told him no.  Not that I could not or did not want to go.  I absolutely won’t turn down a ticket that he graciously paid for (but had a cancellation, I believe).  I told him, I couldn’t bear the burden of a loss.  The Rangers were down 2-0 in the series.  That game was a “must win.”  He said, he’d take his chances with me.  And they won.  They ended up taking the series too.

So I thought, maybe that dragon was slayed.  I dislike the Capitals a lot because of this playoff history.  But as I said last night in a tweet, I’d have straight up died before Game Two had this series been against the Islanders.  Don’t get me wrong: I’d have enjoyed it.  I preferred it, actually.  But I don’t think I would last long.

Anyway, I was telling my dad how positive I felt going into this series.  If you know me and follow me, you know that is the LAST thing I think about with this team.  Even though they won the President’s Trophy, it is simply not enough.  It’s #CupOrBust for me in 2015.  Otherwise, this year will be an ultimate disappointment.  There, I said it.

But I told my dad, I felt as though the playoffs were just a formality.  (I also said that about the Seahawks this year.  They did make it to the Super Bowl.  The ending wasn’t what I wanted…but I digress.)

Then I made the cardinal mistake of mentioning that I felt like the Rangers would be a little “rusty” having had no hockey for almost an entire week.

The game was interesting from the get-go.  The Rangers certainly had their opportunities early on in the game.  When Ovechkin gets a “surprise” goal (meaning: no one really believed it went in), I found it hard to believe that would be the only goal scored until late third period.

What’s more: the Rangers did not bring their A-game.  AT ALL.  Missed set ups and passes, futile breakaways.  Of course, there’s the inevitable save here and there by Braden Holtby.  But still, there were plenty opportunities, hardly any were fruitful.

The crowd was in rare form.  For all the renovations have done regarding the fan experience, some people have complained that the fans don’t do *enough*, they are too quiet, etc.  I beg to differ.  Before opening face off, the crowd was raucous and fun.  It reminded me of the old days.

Man, I’m so pumped, in ready to lace up my skates and get on the ice for the BLUESHIRTS #NYR #ChangeTheEnding

The guys sitting behind me, though, they had a difference of opinion. An alcohol-induced opinion, for sure, but opinions nonetheless about how bad the fans were. In fact, one of them generated a laugh from me when he said in so many words that all the fans were doing amounted to “playing with their dicks.” If you follow me on Twitter, you know those words have come out of my own mouth from time to time. When they started picking fights with other Rangers fans (Seriously…YOUSE ARE ROOTING FOR THE SAME TEAM), it was time for the bros to go.

I almost had to break up ANOTHER NYR fan on NYR fan fight – instant assholes: just add alcohol

Right after they were tossed from the game though, a miracle happened…The Rangers finally scored! Who cares they tied up the game late in regulation…they scored!

But looking back at the entire evening, the fact that the Capitals scored the go ahead goal with less than 2 seconds left in the game, it was pure poetry.

Whether it’s the week off, missing Mats Zuccarello, Rick Nash and Martin St. Louis taking a dump, I’m not sure.  Something was certainly off this entire game.

Anyone who says the Rangers should have won that game clearly knows nothing about hockey nor watched the game.  They had no business winning that game.  Even if they did, sure I’d be in a better mood than I have been all day, it certainly would have been in spite of their previous play.

Seriously, they lost significant leads in the Stanley Cup fucking Final last year, and this year, they let their guard down in Round Two.  I may have felt at the beginning of the game that it was merely a formality to play these games.  I mean, that’s how confident I felt as a fan in this series.  Now, not so much.  I hope Alain Vigneault threw the book at these assholes.

Every year around this time, I get a little nostalgic.  The summer of my 18th year, I discovered the Pet Shop Boys, and one my “desert island albums” is an album that come out the year before, Very.  I wrote about this at length last year during their run to the Stanley Cup Final.

When I was in California a few weeks ago, I was on a train from Sacramento to Oakland while the Rangers played in game two against the Pittsburgh Penguins.  It was the only game the Rangers lost in the first round.  I was joking around that on my playlist, a song from Very came on shuffle.  We had this one.

For some reason, I have not felt like listening to the album this time around.  Which surprises me because as sure as death and taxes and the Rangers being in the playoffs on the road to the Stanley Cup, I listen to Pet Shop Boys Very.

Last night, though, after walking a zombie march essentially from the Garden to the Port Authority Bus Station (where my dad had taken the bus from New Jersey several hours before), I felt like listening to some music on the train ride home.

Yeah, I thought, what the fuck exactly have I done to deserve being in sports futility????

Seriously, I had great luck, rooting for teams that hadn’t won championships in a long time, and being a fan for like five minutes in the grand scheme of things, they win championships.  The Mets and Rangers won in short periods of time in relation to my becoming a fan.

And yet, each year, something happens that raises my disappointment to an art form.

While I don’t believe the point of sports is to win but rather to entertain (and Flying Spaghetti Monster knows, I’ve been entertained more often than not with these bar raising disappointments), I’d still like a bone thrown my way.

And I can only surmise that after last night’s shit show, things can only go UP from here.

So please, get out of the bathroom, stop taking a shit, and just fucking PLAY BETTER.