So, tell me that you love me
Sort out this confusion
Say our love is still alive
For people must be jumping
to the wrong conclusion
that one and one make five

A few years ago, the Rangers played the Flyers in the Winter Classic.  While I thought it would be entertaining to go, while I thought it would be fun, I decided against going.  People argued and said, “It’s a ONCE IN A LIFETIME type of game! You HAVE to go!!”  I disagreed.  I figured, it would come around again in due time.  Now with the Stadium Series happening, I am glad that I didn’t go.  I never had any regrets.  And as big of a baseball fan I am, I never once thought I should’ve gone to the All-Star Game when it was at my home stadium in 2013.  I’ve just never been an “exhibition game” type of gal.  Or novelty.  Whatever you want to call it.

I decided that I would have an element of regret if I didn’t at least try to get to the Stanley Cup Final game.  Winter Classics, Stadium Series…I figured it would be a given if a cold-weather team played in it at some point.

I was 18 years old the last time the Rangers found themselves in a Stanley Cup Final.  I am now 38.  I am two years away from 40.  I did NOT want to be in a position where I was pushing SIXTY the next time the Rangers were in it.

I monitored the pricing on StubHub.  Based on what Game 3 tickets were going for, and they were down 2-0 in the series, I thought it would be a virtual impossibility for to me attend unless I won tickets.  Then all of a sudden, the series was 3-0…and Game 4 became a potential elimination game for the Rangers.

I remember thinking vividly, I needed to go to this game, at some point on Tuesday afternoon (the day prior to the game).  And when I saw prices had fallen from upwards of $1,300 to now $400 for 400 level seats…I thought it was time to take the plunge.

Until I had a tough time finding a single seat.  I sent a text to my dad early in the day.  If I thought I had it bad, he saw a championship for his team 24 years after becoming a fan.  Then he had to wait another 20 to see them in the final again.  I would say, $400 was a fair price to pay for that luxury.  But he told me he wouldn’t be able to make it.

Ed told me that he could justify my going, so I could jump at the tickets.  But the ever elusive single ticket, it was dodging me.  But I decided I needed to go.  I needed to make that shit happen.

Worst case scenario…my team loses and I see another team celebrating a championship on my ice.  While I wasn’t at the 2000 World Series, the concept wasn’t exactly foreign to me.  I decided, I could handle it.

The other scenario is that the Rangers win, stretch it to five games (and I had some friends going to LA no matter for a conditional game to follow the Rangers…die hards, if you ask me), and I’d have seen my team win a game on home ice in the Stanley Cup Final.

Those odds were okay with me.

Till I realized, I had a kindred spirit who also wanted to go to the game.  Someone I had not seen since Hockey Date Night in early 2013.  Someone who agreed with me that we totally sucked for not getting to a game in 2013-14 season.

@MissJtotheK amen. Btw do you want to do something crazy and spend $440 on a game ticket tomorrow?? I’m thinking of doing it

Before I knew it, we were texting, and then I was signing into StubHub to take the plunge to go to Stanley Cup Final.

It just made absolute sense that I needed to be there, no matter what.

This was an odd year for me.  I didn’t get to as many Rangers games as I wanted to.  I opted out of my package that I usually bought, which led me at least some playoff option.  I knew ultimately I’d regret it, that somehow the Rangers would be guaranteed to make the final this year.  Of course they did.  (After all, this team does like to torture me).

I did, however, get to watch most of their games on television…something, by the way, I’m not very fond of doing.  (Just not a big fan of watching hockey on TV).  I followed this team so closely, and especially during the playoffs, I fell in love with them even more.  The Rangers have always had a reputation of being a blue collar and hard working team, and their fans are just the same.  This year, it was different, and especially after the series against the Penguins, I got to see first hand just what it meant that “The playoffs are about whoever gets the hottest.”  It’s never about “who is the better team on paper.” It’s not even about “Who wants it more?” (You mean to tell me that Henrik Lundqvist doesn’t want it “more”?? Dafuq outta here with that).  And the playoffs were fun for me. 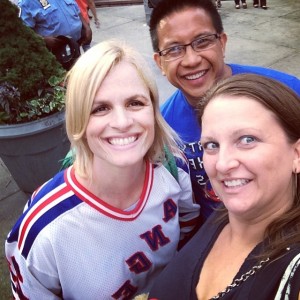 And as @MissJToTheK and I said, YOLO…you only live once.  And anything can happen…just ask Ceil Saidel.

I’ve said before that no matter the sporting event, if there is a championship game here in New York City, you’d almost never think of it unless you followed that sport and/or team closely.  You can’t help but get caught up in the hype of this team.  You go anywhere near or around Madison Square Garden, you feel the energy.  You walk down the street, you can’t swing a dick without seeing someone in a Rangers jersey.  I remember partying on the street when the Rangers last won the Cup in 1994.  I definitely remember it being more of a Knicks town, who were going on an amazing run themselves.

This year was special.

And though I tried to fool myself by thinking I had made peace with any outcome (and I had felt that way during the first two periods), I really wanted them to win to force game five.  It was a bit chilly in the Garden.

I’m shivering. Not sure if it’s because I’m cold or #BecauseItsTheCup

It seemed like the team was playing defense the last 20 minutes. I wasn’t the only person who noticed that they weren’t going in for the kill.

Got to play to win! Looks like the #Rangers are playing not to lose! Shot differential huge!

I felt though as the time ran down, that a win was imminent. But of course the hockey gods had to fuck with us a little, towards the end. Because of course they did.

It wouldn’t be a Rangers playoff game if they didn’t mess with me towards the end.  Like the time I hid behind NotGlen Sather during a Rangers / Capitals playoff game and I was also holding my breath and nearly hyperventilated as we left.

It also wouldn’t be a complete game if a fight didn’t break out in the stairwell (ON THE STAIRS…bunch of fucking morons).  I got half a beer cup that drenched my back in the aftermath…and a Rangers fan…and RANGERS FAN told me to “Shut my c**t mouth” (I don’t say the “C” word…one of the few words I don’t say) because I told him to lay off the Kings fan who was minding his own business, who was in the wrong place at the wrong time.  I also saw a fight break out in 2011, between two grown ass men, who were both rooting for the same team.

No wonder they cut off alcohol sales after the second intermission.

I think Joanne and I barely said a word to each during the game.  But sometimes, you don’t have to speak.  There were no words.  We felt what the other was feeling.  I even told her I had a feeling I’d be crying, no matter the outcome.  I didn’t cry.  But I did feel very sad to see it end.  Happy that it happened though.

The Los Angeles Kings and New York Rangers do have a history, though.  This isn’t the first time that the Kings have been responsible for making me a sad Ranger fan.  Back in the 1989-90 season, the Rangers traded Tony Granato for Bernie Nicholls…I loved Tony, never liked Nicholls.

But if you look at the bright side, like I managed to do for game four, Nicholls was turned around to get Mark Messier.

And we ALL know what happened when he came. 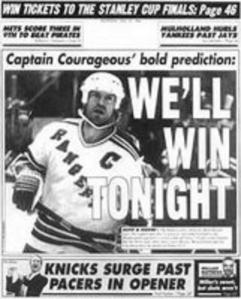 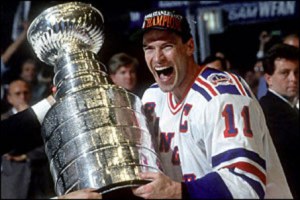 I got watch a pretty amazing season, front to back, top down of the Seattle Seahawks and they went on to win the goddamn Super Bowl.  They looked at it as one game at a time.  Not a “we need to win X amount of games to win the whole damn thing.”

They looked at it as, if we win this game, we play the next.  And each game was a one game decision.

Russell Wilson also asked of his teammates, “Why not us?”

Champions do that.  Why not you, Rangers?  Why not win game five, and move to game six?  WHY NOT?

Nothing is impossible.  I’m still at peace with whatever the outcome tonight.  It was a lot of fun getting here.  The 2013-14 Rangers are a team that have endeared themselves to my heart.

I’ll enjoy whatever they give me, but why not you?  Why not you??