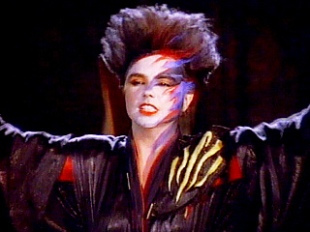 I haven’t watched pro-wrestling since the late ’80s, early ’90s maybe.  I remember as a kid, my cousin and I would play in our grandma’s backyard, and pretend to be our favorite wrestlers.  I forget who we were, but I was probably Jimmy “Superfly” Snuka and he might have been Hulk Hogan a few times.  We’d play our “entrance music,” slap “high fives” with the tree branches, and make our way to the “squared circle” (usually the trampoline).  We’d pretend to beat the crap out of each other (or sometimes, for real) as our wrestlers.  Then we’d play with our WWF action figures.

That’s how old school I am.  I used to watch the old World Wrestling Federation (now World Wrestling Entertainment, which was good for me as a change, since I was probably one of those geeks who got all excited then simultaneously disappointed when the WWF stood for “World Wildlife Foundation”).  This was right around the time Hulk Hogan got famous.  Then everyone got in on the party.  The Iron Sheik. Nikolai Volkoff (I think that’s how his name was spelled).  Old timers like Bruno Sammartino and Gorilla Monsoon.  Tony Atlas. Shawn Michaels before he was the Heartbreak Kid.  All Vince McMahon’s vision.

Before The Rock became a household name (even prior to being movie star Dwayne Johnson), there was another Rock known as a Blade Runner.  You may remember his tag team partner, Sting, who went to become one of the most famous wrestlers.  But Rock turned into the Dingo Warrior, and then ultimately “Warrior.”  The Ultimate Warrior.

Like The Rock after him, I think fans were getting antsy about being told who to “like” and who to “boo.”  The good guys, the bad guys.  There was always a defined role.  The Warrior was different.  Like his contemporary, Randy “Macho Man” Savage, they didn’t give a crap who cheered or booed them.

Something about Warrior drew me to him.  I wouldn’t say I was his biggest fan, but I certainly remember his matches.  His infamous WrestleMania match with Hulk Hogan.  Him beating the Honky Tonk Man, whom I LOATHED.

Then I guess I became too cool for school and stopped watching pro wrestling entirely.  I have to say, it was easy to keep up with the story lines, especially since that cousin I referred to earlier still followed it somewhat religiously.  I knew enough about the characters that one time I played “Shag, Marry or Throw off a cliff” my theme was pro wrestlers: Chris Jericho, The Rock, and Hulk Hogan, respectively.

Clearly, something rang with Warrior, who embraced this persona to the nth power.  Fans, even if they didn’t love him, appreciated him and his value to the brand.  In his post-wrestling career, he gave inspirational talks.  He was a family man.  And like many pro wrestlers before him, left us all too soon.

It’s easy with Twitter and Facebook to follow the goings-on each Monday night or any Pay-Per-View spectacular like WrestleMania or Survivor Series (does that even exist anymore?). But what I did know that the last WWE Hall of Fame induction, Ultimate Warrior rose once again.  Then he made an appearance on RAW to give what was to be his last inspirational talk.

Every man’s heart one day beats its final beat, his lungs breathe their final breath and if what that man did in his life makes the blood pulse through the body of others and makes them believe deeper in something larger than life, then his essence, his spirit will be immortalised.

James Brian Hellwig was Warrior’s birth name, but he legally changed it several years ago.  He was only 54 years old.  He was younger than my parents.

You don’t know where life will take us.  We can literally be here one minute, and gone the next.  This was true with Warrior, as he blew up Twitter several times this week, the last time what pretty much anyone who followed his career hoped to be a cruel hoax.

I can’t help but wonder, from my point of view where I worshipped these legends as a child, that someone, somewhere has failed them.  If we think about the late ’70s/early ’80s, and senseless substance abuse deaths like John Belushi or Douglas Kenney from National Lampoon, I feel as if in a way that pro wrestlers seem to take the fall.

Like Mickey Rourke in The Wrestler, his only identity in being Randy “The Ram” Robinson gave him life, but also was his demise.

I don’t know how Warrior died, but these men tend to leave us way too soon.  I wish I had paid closer attention to his last few appearances, but so goes life I suppose.  We are each one day closer to our last breath.  And his was just ironically too soon after we all saw whom many of us recalled as an old friend.