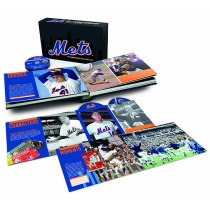 I have what we deem as a “Christmas birthday.”  While everyone on planet Earth (okay, maybe just **here**) is prepping for the holidays and transition into the New Year, a day celebrating me is thrown in the mix there.

Being a sports fan, it’s never been out of the realm of possibility to get a sports-related gift to celebrate.  This year, the big “get” was the Mets 50th Anniversary DVD collection, which was kind of a family gift (my husband has had his eye on this sucker for a WHILE now).

I was super excited to see that in the collection, one of my favorite Mets videos, An Amazin’ Era (a chronicle of the first 25 seasons of the Mets), was available on the DVD set.  Super excited probably doesn’t get it – super-duper is more like it.  Of course, the DVD was extended to include the 1986 championship and the NL East run in 1988…something that was a “To Be Continued…” part of the original VHS.  And yes, I still have that thing somewhere.

I often take for granted that the Mets won a championship in my lifetime.  Sometimes though I imagine what life might be like if I didn’t have that year.  If watching the 1969 highlights is all we’d have for going all the way…but so many close calls, like the 1973, 1988 and even the late 90s.

Then the night my husband and I watched the video, he fell asleep, and I was there in insomnia land.  Not only did I get to relive the Mets championship years, I got to see a retrospective on the New York Rangers 1993-94 Stanley Cup run.

I guess I’m a little more than fortunate when it comes to my teams.  Some fan bases have never seen a championship in their lifetime.  I’ve seen one for each of my teams.

I said last year that the team closest to a championship would have been the Rangers.  It’s only cruel and unusual punishment that they have not been able to drop the puck this year.

The Mets seem to be making some moves to ensure that in the future, championships will be dancing in our heads.

I suppose it is only fitting that when I look at the last time the Mets had “relevance,” it was 2006…life would be so much different if they were able to make it the World Series, let alone win it.  Yet, 2006 was a long time ago.

The same could be said for my third team, the Jets.  Two years in a row, they did not make it to the playoffs despite high expectations.  The two years PRIOR to that though, they made it as far as they could go without going the furthest, if that makes sense.

I’m trying to take the football victories where I can.   I can be happy for my friends and family who root for different teams.  My husband is a big Seahawks fan.  We even went to see them play the Jets in Seattle in November.  He was in Hawks Heaven…I’m typically found in Jets hell.

Today, though, I heard that while Mike Tannenbaum was let go, Rex Ryan is staying on  I really don’t know how to feel about it.  I know the buck stops there, but ultimately, how many times can changing the coaching staff really help?

My thought was…I was brought back so many good memories of having my teams winning in my lifetime.  This is a gift I not only cherish but also do not take for granted.

Yet, I don’t have the warm fuzzies with the Jets, except maybe the time from 2009 and 2010.  Some other years there, but I guess deep down I knew it just wasn’t their year.  I had such high expectations only to be dashed at the last moment.  I would then have higher hopes for the future, only to get pooped on later.

My point is wondering why I stick around.  Sometimes, especially after seasons like this, make me wonder why I just don’t go root for another team.  I wonder if things will ever change.  I doubt they will.  Yet, I don’t want to be that fan who gave up when it was so close.

I could only imagine what it was like for people like my dad, who stuck around with the Rangers though they didn’t win till he was a long-time fan and was even lecturing me on the prospect of the Rangers not making it past game six in the 1994 Eastern Conference final versus the Devils.  It became evident, watching the highlights, that the blueshirts were “going for it all” that year.  They wouldn’t have had a better chance after that season.

The Mets started to fall apart after 1986.  I sometimes wonder why I stick around with such inept management and even more inept finances.  Then I think there’s no way they can be that bad forever, right?

But I have the championships from those teams.

Then there’s the Jets.  There are certainly bigger Gang Green fans than I am, but we explain it all away when love a team, we make excuses but the reality is…we all want the same thing.

To survive the war together.

I named my first Mets blog “My Summer Family,” after a line in the movie Fever Pitch, which is what Jimmy Fallon’s character says about his Red Sox family.  He later said that he wanted to be involved with something bigger than himself.  It’s why I’ve stuck around with the Mets, the Rangers and the Jets.  To experience that feeling again.  I’ve been fortunate to experience it with two of my teams.

I guess I have to believe there is some payoff at the end.  That during the wars, and the battles, we stick around for the love of the team.

It’s part of who we are.