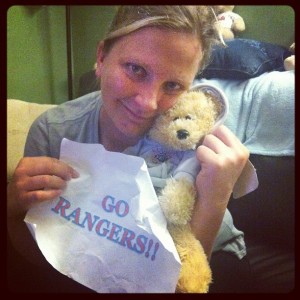 Gabby the Ranger bear held this sign as a I ran the NYC Half in March. They both had a good run, but the sign is now retired!

I lost my job last September. I’ve not had a lot of luck finding a new one.

My lease is up next month. My management company hasn’t been cooperative in negotiating a new one (or rather one that’s not the cost of an elevator doorman building) so I may have to move.

Last weekend, I took a road trip to Toronto where my bus 5:45 am bus didn’t show up, and then to add injury to insult, I literally fell out of the shuttle van when I did return to Buffalo, and sprained my ankle.  Not good when you’re training for the NYC Marathon.  (I’ll be fine soon enough but HEY UNIVERSE LAY OFF THE FUN STUFF FOR A WHILE.)

I came back from the trip to watch the hockey playoffs at a sports bar, where I proceeded to drink so much in violent reaction that I had a violent reaction…right in front of the bar on the sidewalk. (I’m also swearing off drinking too…until the Mets give me good reason to).

My husband then announces he’s passing a kidney stone, but hey, he’s done it before and he’s prepared for the discomfort.

Perhaps it’s fitting that as I sit with an Ace bandage wrapped on my ankle, and my husband literally passes his stone during the Rangers game last night.

This also happened during the same week that my blender sputtered and sparked, shorting out my entire wall, while I made my morning smoothie this week, then my ear buds shorted and only one side works (#FirstWorldProblems).

Perhaps you can tell that it hasn’t exactly been my year (week or month, really, either).

To recap, I’m unemployed, I’m losing my apartment lease, I can’t run when I’m officially training for the NYC Marathon because of a freak accident in a fucked up road trip, and then the Rangers lose a hard fought and gritty playoffs to the Devils.

If there is a hockey god, I hope there’s a punch line to this cruel, cruel joke.

Someone once told me that “the point of sports is to WIN.” That’s not true. It’s to “entertain.”  You can only ROOT for your team to win. And hope they do. Some fans aren’t as lucky. Some are.

And yes, I believe a Yankee fan once told me that thing above.

One of the bright spots or distractions for my shitty ass life this year has been the Rangers. This has been odd for a few reasons. I freely admit that I gave up on hockey a few years ago. Then ironically, the Mets brought me back…in 2007.

The first game I attended was Rangers vs Devils as the Garden in December 2007. If I remember correctly, Brendan Shanahan scored an OT goal for the winner. I’d forgotten how much fun hockey could be.

But it hasn’t been an easy time. While the Rangers have been consistently growing, the Mets continued to insist they could pull my heart out of my ass, the Jets came within one game of the Super Bowl two years in a row only to miss the playoffs entirely last year, and even the Rangers didn’t make the playoffs one year in that span.

But I wouldn’t want it any other way.

I started Gal For All Seasons this year as a distraction. I wanted to write about more than just baseball and Mets. I figured one of my teams might give me something positive to write about, and boy did it ever. I don’t remember exactly *when* I started to feel like this would be a fun time for the Rangers but I do know that I felt it.

I even said on a podcast that I felt like anything less than an Eastern Conference Final visit would be a failure.

Well, be careful what you wish for.

And there were a few miracles along the way.

When MSG and Time Warner weren’t playing nice, I changed my cable provider. SO I COULD WATCH HOCKEY. Five, six years ago that shit wasn’t happening.  I just dealt with not watching.

I started a podcast based on this blog, but my hockey shows were one of the highest rated on my channel (**shameless plug**). I met a lot of new wonderful people. I started to embrace MSG as my second or third home, depending on what time of the season it was.

I even had a newfound respect for Martin Brodeur, whom I’m relentless in abusing, but in that he gets it, he gets the rivalry. Kind of like Larry Jones, who once thanked New York sports fans for reminding him of his name.

My friend Solly told me he didn’t want me to be sad (funny, how Devils fans were the people talking me down from the ledge). But I’m not. Well, not anymore.

I’m so excited about the years to come.

We may not be going to the NHL finals. But i wouldnt trade being a @thenyrangers fan for anything in the world. #IAmARanger

The only constant in life may be change. But Ranger fans take note: what’s going on here is something to be excited about, to be happy about. A young core to ride for a few years, who are the heart and soul of the team. A tough as nails coach. A legend in the making goalie.

Yes, this team may kill me someday. But I feel like real soon, I may die a happy woman.

Let’s not forget how much fun this ride was this year and let’s move forward to the next chapter! 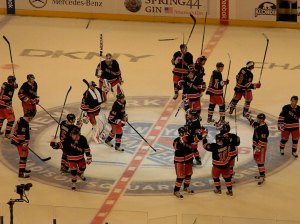