Back then, the names on the jerseys were Messier, Leetch, Graves, Richter.  There might have been a Gilbert or Ratelle jersey in the mix.  I might have even seen a Gartner jersey.

This, of course, is my trip to TGI Friday’s on 34th St and 8th Avenue, a few blocks north of the Garden.

Gabby the Ranger bear anxiously awaits the opening faceoff while dining at Friday's.

It’s sacrilegious you know, since I do live in New York City, to go to of all places a chain restaurant that merely serves to set itself up as a tourist trap.  Well, bear in mind that once upon a time I actually was one of those…yes, I was a tourist.  I was also 18 years old, not of legal drinking age, and when the Rangers won the Cup in 1994, my dad and I wanted to be near the celebrations.  I could only imagine what places like Mustang Harry’s or Blarney Rock were like in 1994.  All I know is, when I walk past this Friday’s, I get the warm fuzzies, knowing my dad and I were there for the final three games of the series against Vancouver which led to the moment that would last a lifetime, as Sam Rosen called it.  (And by the way, I will miss him for the rest of the playoffs, which are of course to be determined to go as long as they do with how the Rangers perform.)

So Dad and I got a chance to go to the playoffs.  We went last year, to a crushing loss in overtime to the Capitals, and I was thinking this may deja vu all over again.  See, we went to home game two (which is what these are labeled as on the ticket), and I was also coming down with a cold in 2011.  This year, I had a full blown cold, but I’m feeling better now, thank you very much.  The Rangers lost that game in overtime, when Henrik Lundqvist did his best impression of a closer in a non-save situation, as he was fronted a three goal lead, and still managed to give up four unanswered.

I hemmed and hawed.  I wanted to go to a game, but for all I know, it could have been a sweep (it won’t be) and tickets to game five would be moot.  So I threw caution to the wind, and invited Dad and we went.

Dad and I were joking around during game seven in the last series, when I said I should go back to Friday’s for old time’s sake.  Try to get some good energy.  When I told him we were going to game two, I said we should go there for a pregame.

My dad hasn’t touched alcohol in years, but he feels at home at a bar.  It’s odd because he just gravitates towards people, and well, where do people congregate?  A bar!  I drink, as you all know, but since I was under the weather, I wasn’t feeling it.  So we split an appetizer and two soft drinks.  It didn’t break the bank, but we got a kick out of the $19 cheeseburger.

Shit.  Don’t people know you can walk like eight blocks up to Shake Shack for a fraction of cost?  And it’s a far superior burger?

Dad was pretty anxious to get in, about an hour before.  He needed to get his game face on, and so did I.  I also introduced Marian Gaborik, aka Gabby Bear, to playoff hockey.  She was born in December during a game in the Team Store, so this is her first experience.  As we walked into the security bag check, the usher said, “Oh I see we’ve got our mascot here.”  He lifted her out of the bag, and she yelled, “YAAAAAAAHHHHHH!” as she’s wont to do during a game, especially after a goal.  She’s a wild one, all right, like her mom.  She loves junk food, especially french fries and chips (of any kind), is a brawler unlike her namesake.

The 50 or so minutes we had to kill before the game went quickly, as before I knew it, John Amirante was out psyching up the crowd during his rousing rendition of the Star Spangled Banner. 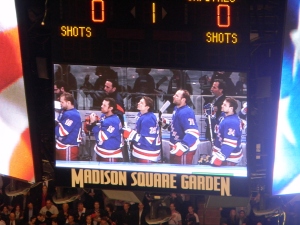 But I guess the rally towels they handed out as we walked into the arena were only good for show, as the Rangers quickly found themselves in a 2-0 hole.  That literally should have been a 1-0 at best deficit, but Henrik decided to get fancy at one point.  Do what you do best, Henke: guard the fucking net.

But they managed to tie it up by coming from behind, only to lose on a bullshit call with a bullshit penalty.  It was like the refs wanted to keep the Capitals in the game.  Although they were in it.

I didn’t think of this as a wrenching or crushing loss.  It was just a loss.  Not like last year as I sat there, with a bad chest cold coming on, wanting to die as they went into OT, where they shouldn’t have been anyway.  I knew the series was over, although technically, it took the Caps a game to finish that deed off.

Tonight was different.  I guess after such a stressful first round, you don’t sweat the small stuff.  You’re going to win some games, you’re going to lose some games.  Shit happens.  Both teams played equally well.  The Caps may scare me, but I think the Rangers can take ’em, and let last season seem like a fluke.  In fact, it only shows this won’t be nearly as easy as we thought.  It will be interesting.  It will be a challenge.

It will be what hockey playoffs are supposed to be.

Yet, I’ve come a long way, because I didn’t have to stay at Friday’s to watch the game, I was able to actually go to the game.

Fridays might not have changed all that much, though.  In fact, my dad pointed out the brass rail that some crazy homeless dude who got into the bar almost tore off the wall during the Rangers wins.  “He Shoots! He SCORES!” the guy kept yelling, as he was falling all over the place.

But instead of “TGI Fridays” it’s branded as “Fridays.”  The names on the jerseys may show Messier, Leetch or Richter, but there are Callahan, Gaborik and Lundqvist.

A new generation, but same old Rangers fans.  And only the names have changed on the back of the jerseys.  The excitement and the heart of playoff hockey still rings true 18 years later.