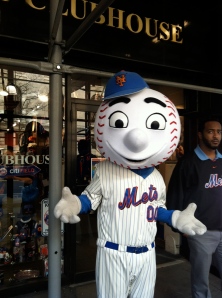 I was in a bad mood today.

I shouldn’t have been, but I was anyway.  I finished a highly anticipated but nonetheless dreaded nine mile run yesterday.  It’s a gorgeous spring-like day, even though it’s not even March yet.

I sometimes get in a mood because I haven’t worked since September.  Today was no exception as I had a phone interview with someone that should have taken place on Friday, but my appointment got screwed up.  I was tired of people implying there is something wrong with me.  I didn’t sleep well either.  I had an appointment with a financial adviser.  Don’t worry: not taxes (yet, though that’s sure to be F-U-N with a capital F).

All I wanted was a cup of coffee.

So I heard that the Coffee Bean and Tea Leaf was no opened by Bryant Park.  However, turns out my sources weren’t entirely on.  They’re a little below Bryant, but no worries.  The Mets Clubhouse Store is there, and I figured I’d report on the fact they still do not have Jon Niese shirts in the store (confirmed) and that I figured me investing in an Ike Davis shirsey was in my cards.

But so much more happened.  I didn’t get a shirt.  Perhaps I was too distracted by Mr. Met.

The second I saw him, a big smile was on my face.  That did it.  My bad mood was all of a sudden lifted by the appearance of the guy with the baseball as a head.

He gave me a high-four and we posed for a picture together.  Then, his “muscle” told me that John Franco was in the store signing autographs.

I totally had a brain cramp that Franco was visiting some stores today.  Again, one of those things that was unexpected.  I had gone in looking to buy something but instead I find the mascot and the guy who is being inducted in the Mets Hall of Fame. 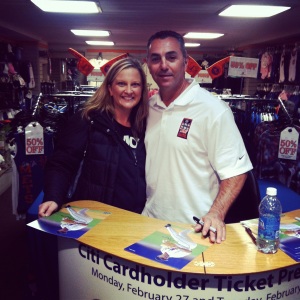 Forget Disney World.  Today the Mets Clubhouse was the happiest place on Earth.

How can anyone be in a bad mood after seeing Mr. Met?  Seriously, how?  I went from scowling to smiling ear-to-ear in no time flat.

Then I remembered something.  It’s not spring on the calendar but it’s in the air.  Rita’s Water Ice is opening soon, the Mets are in spring training, and the weather is very mild.

Till I saw Mr. Met, I would have just been another pissed off New Yorker.  I walked away without an Ike Davis shirt but with an extra skip in my step reminding me of the good I have in my life, and how much baseball is a part of that.

Thanks Mr. Met.  My advice to you is that if you have any worries, just find Mr. Met.  You can’t help but smile when you see him.