So there you have it, folks.  Another football season is complete, with the Super Bowl ending just around 10 pm EST yesterday.

As a Jets fan, I was joking around for the past two weeks that I was rooting for a meteor or an epicenter to form in Indianapolis.  The reality is, though, while watching the game, my hatred for the New England Patriots kind of surpassed anything that I’d ever felt.  I can’t say I was rooting for them to lose, but I felt I snickered more at their misery and mistakes more than anything else.   When the game was official, I knew that the Schadenfreude delight was now complete.

I had a Stan Marsh moment too at one point: I learned something on Super Bowl Sunday.

I learned that I was a football fan.  I watched the game, and I enjoyed it.  I’ve always said that football is the sport I care the least about, but I found the Super Bowl fun and entertaining, and I was able to eat bad carbs and get away with it.

This is the first Super Bowl that I’ve covered here at Gal For All Seasons, since I’ve only been writing since basically the beginning of football season in 2011.  So maybe I’ll incorporate this every year into the Super Bowl recap.

In the movie Little Miss Sunshine, Olive’s father, played by Greg Kinnear, is a pseudo-motivational speaker.  His philosophy is coined on taking the steps of being a “Winner.”  He starts off the movie by saying, “There are two people in this world: winners and losers.”  The same could be said about sports, obviously, and the Super Bowl is a one-and-done game.  So I’m channeling my inner Little Miss Sunshine today.  Some of the winners and losers may be obvious, but I’m going to have fun with it, as only Coop can do.

At the beginning of the game, I mentioned to the group I was watching with, that he looked like he aged about 30 years this season.  Talk about a year of ups and downs.  Now he’ll be enshrined in Giants history as one of the best there ever was.

This was a no-brainer.  I’ve said all along that I’ve felt that Manning is overrated.  I’ll probably get killed for this, but I still do (you can thank the chemistry of his offensive line for the win last night…not to discount his performance, as he came through when the team needed him most which is more than we can say for the other team).  That said, he’s finally gotten out of the shadow of Peyton…literally.  During this first matchup in 2008, all that was shown was Peyton watching his little brother.  They were in his HOME FIELD…and everyone mentioned that Peyton wasn’t shown once on the broadcast.

Manning may be overrated.  But he’s an overrated QB with two rings.  And will get the respect he deserves, singularly.

I love this guy!  How can one not have fun watching him play?

Cheaters NEVER win, Bill.  I also reacted to Belichick’s vision on screen the way Bluto did to seeing Kent Dorfman’s face on the screen in Animal House.  “AGGGHHHHHHH!”

Welker has gotten a lot of heat for dropping a crucial pass that could have sealed the fate of the Pats.  He took the criticism, and the blame for it.  He took the high road.  He didn’t need to.  The reality is, it was a poor throw from Brady.  Skip Bayless argued that Brady is one of the most accurate passers of his generation…but it was Brady who made a poor throw to Welker.

At the end of the day, I go back to my original argument.  That this game was the Patriots to lose.  The Giants had absolutely no pressure on them.  And look what happened: they made a somewhat blah game exciting at the end, and they won. 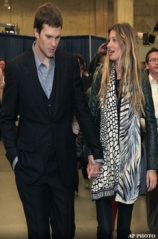 I’m not a religious person.  But I really dislike when people use their power of prayer for trivialities in life, when there is legitimate suffering in the world.  Especially rich people who have everything.  And don’t get me started on Tim Tebow.  But Gisele’s email heard ’round the world: “Please pray for my Tommy.”  Could you get any more insincere than that?  Here are two people, each independently wealthy in their own right, “praying” for a Super Bowl win?  Get bent.

But it gets better.  Apparently, Gisele had some choice words for her Tommy’s teammates after the loss.  “My husband cannot [expletive deleted] throw the ball and catch the [expletive deleted] ball at the same time.”  I know Brady is one of the best there is, but come on…like he hasn’t choked the same exact fucking game away twice?

Gisele, you seem like an intelligent business woman.  But please keep your mouth shut about your husband’s profession.  It makes all women look bad.

Speaking of making all women look bad, Stacey Tavor Merwin has set the feminist movement back at least 45 years by emasculating her husband to the extent that when they got married last year, her husband (who makes a livelihood of sports photography) mentioned that there will be a chance that the Super Bowl might fall on their anniversary.  So what does she do?  Create a hubbub reminiscent of Bridezillas.  And insist they go out on one of the biggest sports nights of the year…and writes about the wifely sacrifices SHE needs to make.  Like walking the dog.  Big fucking whoop.  It’s like the old Chris Rock bit that used to say, “I take care of my kids.”  Yeah, you want a cookie?  YOU’RE SUPPOSED TO TAKE CARE OF YOUR KIDS.  And you’re supposed to take the dog out on walks. And if your husband wants to watch the Super Bowl, you could compromise and go out to dinner the night before…or have some kind of special weekend away. I know from being married, it’s about the other 364 days a year, not just that one day of the year.

Read Kristine Reese’s post on that in The Green Room from Sunday.  Her take on it is better than anything I could ever say.

I was in a house watching the game with a ratio of 3 women: 1 man.  Take that, Ms. Merwin. (And her husband could have totally joined us)

Clarkson nailed the Star Spangled Banner.  Some singers make the National Anthem more about “them” and their vocal styles, as opposed to making Francis Scott Key proud, with the way it’s supposed to be sung.

Kelly Clarkson is a healthy role model for women everywhere.  Because she doesn’t weight 75 lbs is cause for vicious attacks on her body.  She’s healthy.  She looks phenomenal.  Leave it alone, the criticism gets old.

She started out strong, got bored in the middle and it ended okay.  But I felt like that episode of The Simpsons, where Homer was watching Bachman Turner Overdrive play and he kept yelling, “TAKIN’ CARE OF BUSINESS!! TAKIN’ CARE OF BUSINESS!!”  To which they said, well, that’s all the crowd wants to hear anyway…so they break into TCB, to which Homer yells out, “GET TO THE GOOD PART!!”

Yeah.  That was how I felt watching that.  While I know Madonna has evolved over the course of her career, let’s be fair: people want to hear the ’80s shit.  If she had stuck to that, I think it would have been a lot better.

I am a Jets fan.  I probably weighed the pros and cons of this Super Bowl a few times.  I wasn’t going to root for anything, but the Patriots losing did make me smile a little.  The Jets had nothing to do with the games.  They haven’t even friggin played since New Year’s Day.  But sore winners still make it a point to bring up the Jets’ faults.  Again, what the fuck does that have to do with anything?  And most Jets fans were happy about how it turned out last night.  Those who feel the need to bring that up don’t deserve to be happy about their team’s win.  Fuck them and the white horse they rode in on.

My mom once pointed out to me that I have an unnatural hate towards all things Boston.  That’s not true.  I don’t dislike the Red Sox.  You know, that whole “enemy of my enemy is my friend” BS.  In 2004, I was pleased as punch when Boston knocked out the Yankees and then went on to win the World Series (mostly as a baseball historian).  But I never liked the town of Boston.  It aggravates me to the point that I just trash it when I’m there.  My mom tells me I have a New York City complex.  While that may be true, the reality is, Boston doesn’t make it any better by contributing to the whole “inferiority complex” thing.  Like Philly. I also have an unnatural hate towards all things New England.  Not lobster.  Or New England clam chowda.  But Connecticut: HATE.  Massachusetts:  Hate hate hate.  I’m sure if I visited Vermont or New Hampshire, I’d find a reason to hate them too.

So New England – Fuck you!  Take a cue from what it’s like to be from a REAL metropolis.