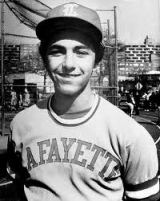 I was never a John Franco fan.  Don’t get me wrong: great guy, local boy gone good, a St. John’s guy (my husband’s alma mater), fun dude.  When the Mets went to the NLCS in 1999, I’ll never forget Franco’s reaction as he ran towards Todd Pratt.  Franco was, in a sense, one of us.  But I still was never a huge fan.

Besides the rumors of his meddling in the clubhouse (which he staunchly denies, but I believe there is an element of truth to it), his part of Jeff Wilpon’s inner circle in his later years, I kind of felt like he overstayed his welcome.  Even in the beginning of his Mets career, he was just okay.  I felt like he was overrated.  But I was outnumbered (see: local boy gone good).  Plus, how can we forget that he was part of the reliever combo that my Aunt Melissa referred to not-so-affectionately as “The Heart Attack Twins” (along with Armando Benitez).

Like most Mets fans though, when he returns, I give him his due.  Nobody likes a party pooper, after all.  Yet, it’s a respect thing.  He spent 15 seasons with the organization.  He’s like the later generation’s version of Eddie Kranepool.  Today, we found out that Franco will be memorialized in the Mets Hall of Fame this summer.

But I mostly cheer him because I have a funny memory surrounding Franco.  It had to do with a game I attended with my dad in 1996.  It was a Sunday doubleheader in I think July of 1996.  NO ONE went to games back then.  Meanwhile, we had tickets in Row X in the Upper Deck.  The usher did take pity on us though, he told us we could move down to wherever we liked since no one else bothered to show up.

The first game was a real snooze fest, but the Mets had the lead going into the 9th inning.  As legend has it, John Franco comes in to “close” and lo and behold, blows the lead, leaving the game tied in the 9th, for the Mets to not come back at the bottom of the inning.

This had to have been one of the most boring games I’d have ever attended.   Meanwhile, Franco blows a perfectly good 9th inning lead.  We didn’t even stay for the end of the game, or the second game of the doubleheader for that matter.  The Mets ended up giving up a few runs in extra innings.  But the greatest gift of the day was from someone sitting in Row X in the Upper Deck.

“FUCKIN’ FRANCO!!!!!” is all we heard after the Mets gave up the runs.  Franco wasn’t in the game at the time, but he gave up a perfectly good lead that led to this.  And led to us not staying for game two.  It was just too exhausting.

Even though Franco is a good dude, I usually say, “Fuckin’ Franco!” whenever I see him or talk about him.  John “Fuckin'” Franco.  Congratulations on making the Mets Hall of Fame.  Despite my personal opinion of you, this is well-deserved and you do a lot for the organization.  I will be at the ceremony, since I celebrate all Mets, and I still like Franco as that “good guy.”  But to me, I’ll always add an “F” as his middle initial, unlike my Aunt Melissa’s term of Franco and Benitez, it is in a loving manner.