If there’s one thing you need to know about me is that I really really dislike shootouts.  I say it every time on Twitter when I have to watch one on TV.  I attended one live a few weeks ago, and I’m just getting to it now, here.  BlondiesJake said that I may not like it, but if you’re a fan in the stands, you aren’t leaving till it’s over.

I guess he has a point.  I didn’t leave till it was over.  But I still hated every second of watching it.  But luckily, I was in good company, so it was worthwhile.

Back in December, at my annual joint birthday party with Dee, our friend AM came to celebrate with us.  I have to say, that I didn’t know AM very well prior to this night. In fact, I had only met her twice prior to this night, evidenced by these photos below. 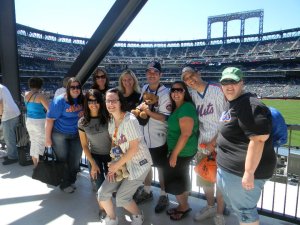 But we had so much fun at the party, we wondered why we hadn’t hung out till then.  So it was settled: a few days later, we decided to go to the January 11th game against the Phoenix Coyotes at the Garden.

It was a pretty boring game.  It was scoreless most of the game, and went into overtime anyway.  The most exciting parts were when AM and I walked around, as she hadn’t yet been to the “new” Madison Square Garden yet.

Though we passed sausage stands and a kosher Mexican stand, AM wanted a pretzel, and we were having trouble finding them.  One of the beer guys was selling popcorn.  We asked if he knew where to get pretzels.  He shrugged, said, “They’re hard to come by on this level.”  They were right behind him.

We took a trip to the sky bar in the 400s, and we saw our boy Dancin’ Larry.  We got a dance from him later on too!  The biggest find of the night thought was AM finding the “Yoo-ling” beer.  (It’s an inside joke, let it go).

Up to the point of the shootout, the most exciting part of the night was seeing Mark Messier introduce the Pee Wee Rangers in between periods.

(And a shameless photo of us two girls)

To Jake’s point earlier, I know it keeps fans in seats, it’s not a “tie,” which is sort of boring.  But honestly, I guess I’m just old school.  Give me “Sudden Death,” or give me liberty.  Or something like that.  I guess I just feel like a season or a game should be decided on luck.  Then again, I guess one could argue that the game is predicated on that.  So there’s that.

I just don’t care for it.  Till the Rangers won one live.

There were tons of things that could have gone differently in the game.  But I guess that going with a new friend, and rooting for the Rangers, and seeing a Ranger win…there are worse things in life I suppose.  Like being a Jets fan.  Or a Mets fan.