People who know me as a Mets fan know that I live, breathe and eat (sleep too, since they can show up in my dreams) all things Mets.  So when they ask me “what would YOU do this off-season in regards to…fill-in-the-blank?” (Mostly concerning Jose Reyes, but also how to improve the team)…I really have no clue how to respond.

The past season wasn’t just one thing that stood out to me.  The Mets ranked number six in the National League in runs scored, so scoring runs wasn’t a problem…yet, they didn’t have a 100+ RBI guy at all (and the guy who led the entire team in 2011 was no longer on the team as of the end of July).  Plus, even with the scoring run potential, that didn’t mean much since it wasn’t enough to win.  This suggests to me that what needs the most revamping is the pitching, from top to bottom.  There just needs to be a douching of the entire staff.

First things first, I want to address the “Jose Reyes Factor.”  I love Jose Reyes, I’d like nothing more than for him to be a Met for life.  If you had asked me at the beginning of last season what I thought should be job one, I would not have blinked when I said, “We need to keep Jose Reyes.”  Being a big market team is one thing: being a shithead with your payroll and tying it to one player is another.  Not to mention, other ownership outliers, which Mike Silva from NY Baseball Digest addresses.

This post isn’t about Jose Reyes though.  It goes into where the crux of the Mets problems has been for the past five years essentially.  Pitching hasn’t been horrible, but hasn’t been fantastic or show-stopping either.  I love R.A. Dickey, but when he’s your ace, this is a problem.  Please, spare me the whole “Well, when Johan Santana comes back…”  That is Omar Minaya-esque rationalization, and we have no idea what he’ll be like when he returns from several injury-ridden seasons, and one season where he was out for its entirety. 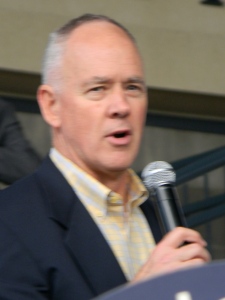 It’s time to see where Sandy Alderson views as pros, cons, strengths and weaknesses of this team.  I had a conversation with Metstradamus a few days ago about how he could have bettered the team going into 2011, like trading Angel Pagan and/or Mike Pelfrey when they were at their highest value.  Now they have about as much value as dog poop under a shoe.  The point is, in 2011, Alderson was damned if he did, damned if he didn’t…do anything, that is.  If he traded Pelfrey, we would have screamed as he had a better in St. Louis or someplace like that.  People would have “never rooted for the team again” if Angel Pagan their darling who clearly peaked in 2010, was gone.  Of course, I am exaggerating but this was something that clearly could have been something positive for the Mets if Alderson had gone the proactive root.

Don’t misunderstand me: I am happy Alderson is on our side.  Yet, with Oliver Perez, Luis Castillo and Carlos Beltran officially off the books, this is now HIS team to run with and improve.  If Silva is correct and the money thing is more of a deterrent than we know (I happen to believe Wilpons are holding onto the team for selfish reasons, but don’t believe it will preclude from them spending money this offseason if need be…Selig, warts and all, would never let a large market team go under on his watch), we may not have Reyes, but there are other places I think that need improvement that probably don’t need millions of dollars to revamp or just for the sake of spending.

My philosophy now is with the official release of the dimensions changing, this is the time to address a big gaping hole in the Mets organization in the last few years and that’s pitching.  Getting good starters is one thing, but if you look at the playoff teams this year, they ALL have deep and very strong bullpens.  Where have the Mets lost a lot of games these past few years?  In back innings.  There were two games against the Milwaukee Brewers in the summer where they have late inning leads, just to see them blown by an inconsistent jumpy bullpen.  Since we’re on the topic too, why the Hell wasn’t Dan Warthen let go in the coaching shake up this year??  That’s mind blowing.  You see the Cardinals, you see Rangers, they have Dave Duncan and Mike Maddux, respectively, as their pitching coaches.  We have Warthen.  We suck in the pitching department.  Bring back Peterson or get better pitchers, goddammit.

So which way do we go?  Barring any catastrophe with Reyes, I will not jump ship, but if pitching is not seriously addressed to go with the new dimensions of the stadium and for a stronger ‘pen, I will go ape.