Why…
This uncertainty?
It’s not clear to me
Would you rather be independent?
Have I lost your love?
Have you had enough?
Do you feel too much resentment?
How can I make you see
When you disagree
That you just can’t leave?

My arc as a New York Ranger fan is pretty simple.  My dad took me to a hockey game, I was 13 years old, some dude name Brian Leetch was a rookie.

They won the first game I went to at the Garden in 1989.  Even without a win, I was hooked.  I loved New York City, even as a child.  It was so different and interesting and going right to midtown for a sporting event was just mind blowing.  I was used to going out to the boondocks in Queens for Mets games at that point.

What got me was the crowd.  They were INSANE.  Forget the 1986 Mets fans, which was also a crazy time.  Rangers fans were gritty, foul, drunken, loud, crude, obnoxious.  Everything that I loved about a fanbase.  They had every reason to be.  My dad told me about the Broadway Blues and Broad Street Bullies.  He told me stories about the rivalries of the ’70s, how his best friend got in a fight and broke his arm.  How he listened to the Rangers being eliminated on the radio in 1975, in the parking lot of Tom’s Tavern in Farmingdale, New Jersey (If you know, you know).

Within a few years, our hockey team that we pledged allegiance to made it to the top of the mountain: the Stanley Cup.  Lord Stanley placed his hand over the Garden, and we celebrated this victory like it was 1999 (though, it was only five years before…in 1994).

That summer made such an impression on my then-young life (ha, keep your comments to yourself), that I still think about that run with such shock and awe.  I don’t think I’ve ever seen anything like it.  Even the Mets making it to the playoffs or the World Series, that electricity I felt with the Rangers is second to none.

If you’ve followed Gal For All Seasons since the beginning, and especially my posts about the New York Rangers, you’ll also know that I associated that fateful run to the Cup with one of my “desert island” albums: Pet Shop Boys’ VERY.

Whenever the Rangers made it to the playoffs, I always made it a point to listen to the album, if not in its entirety, then at least the first five songs.  That was part of my juju that year.  And the opening chords of “Can You Forgive Her?” can just bring me back to my car and driving to my dad’s to watch the games.  Then on the way to the train station when we brought our juju to the city.

What also made an impression were goaltenders.  I fell in love with Mike Richter that summer of 1994, and he remained my favorite New York Ranger, almost uncontested.  Sure, I loved Leetch, and Messier and Graves and all those guys.  But Richter was something else.  He was the first jersey I ever bought.  I broke it out when they retired his number in 2004.

That’s why after the strike that canceled hockey for a while, I gave up on it.  Richter was retired.  The Rangers had traded Leetch away (whyyyyyyy?).  Messier was old and done.  They were a shadow of themselves, not making the playoffs for years and years and years on end.  When you think about how many teams DON’T make the playoffs, it just made me think that they were never serious about winning.

Then my dad told me I should consider coming back.  “You gotta see these new guys, T.  Their new goalie?  Lundqvist?  …

His number will be hanging from the rafters someday.”

I…
Won’t stand in your way
I can’t make you stay
Though, of course, I feel rejected
You’re a part of me
You’re the family
I can’t bear to leave 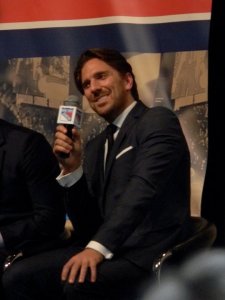 So I went back.  Picture it: winter 2007.  The Rangers didn’t score at all, until overtime and won the game 1-0.  Allegedly, I also wrote about this for a Mets site that is now-defunct.

Almost singlehandedly, Henrik Lundqvist not only changed the Ranger dynamic, he brought ME from the dead, a person who said she no longer needed hockey, that it no longer served her well, and she was just fine without it.

With his coiffed look, suave and sophisticated manner, yet aggressive style of playing, no one defined being a Ranger better.  And who realized that he’d not only change the team, he changed the fucking FRANCHISE.

Sure, we had Eddie Giacomin.  And we ALL KNOW about the “ED-DIE! ED-DIE!” return to the Garden.  Sure, Giacomin was a legend to Ranger fans.

Henrik took it next level: He’s a Viking fucking WARRIOR.

I keep talking about Henrik Lundqvist in the past tense.

I think I gotta go back to 2014 to full capture that I felt the beginning of the end of Henrik’s time in hockey.  He was 32.  He wasn’t getting younger.  And the Rangers made an improbable run to the Stanley Cup Final that year.  They didn’t win.  But they made the Eastern Conference Final three times in his tenure with the Rangers.  But after 2015, they sort of fell off the cliff.  I blame Alain Vigneault.  But I think the Rangers just did a terrible job of building around Henrik.  Even guys like Martin Brodeur had Ken Daneyko and Scott Stevens in front of his net.  Who has Lundqvist had?! Can’t tell you how many times we scream about Marc Staal or Tony DeAngelo just fucking everything up in front of him.

I just knew that something was…ending.  It’s now the year 2020.  Everything is ALL fucked up.  Henrik Lundqvist is now 38 years old.  He has many individual accolades under his belt.  He is still missing a Cup.  I look back at 2014 and realize that was the chance.  The chance we let slip away, and acted like it was so cavalier.

Right before the world ended, Mika Zibanejad scored five goals in a game, that I still think about, and it gives me chills.  I could live to be 100 years old and not see another game like that.  Now, if I wasn’t hooked on hockey, then, I would’ve been after that.

What stood out was when the world ended, it meant endings for so much else.  No full baseball season.  No fans in attendance.  Basketball season stitched together.  But without a full season of hockey, we would have no idea how the Rangers fate would have been settled.  In a year that was long touted as “part of the rebuild,” Artemi Panarin and Mika Zibanejad were having monster seasons.

Henrik was mostly watching games from the bench this season.

I have no idea if this was by design.  If he and young coach David Quinn with his new philosophy had come to an understanding of some sorts.  The team was going with youth, and that also meant in the crease.

I knew, no matter what, before COVID-19 changed all of our lives, before Zibanejad scored five goals and before we knew Panarin was a Hart Trophy finalist, one thing was for certain:

It looked like we would be preparing for a future Rangers without Henrik Lundqvist.

And as long as hockey and sports didn’t restart, we didn’t have to deal with that reality.

Feel…
Free…
To leave…
If you think you’re trapped, but
Please…
Believe…
I’ll always want you back

The fairest way that the NHL could look at 2019-20 was to have a “play-in” of sorts, and the Rangers were a team that made the cut.

They were swept by the Hurricanes promptly.

And goddamn COVID for not only uprooting our lives, but for denying us the chance to see what this team was actually TRULY made of.  For making them perform lukewarm and not in a home ice situation.

And for having us see possibly our last vision of Henrik Lundqvist as a New York Ranger, sitting on the bench, and not in his rightful throne: on the ice, in front of the net.

That is goddamn tragic.

What I wasn’t prepared for was how I felt about seeing Henrik like that.

It was almost more than I could bear.  I joked about crying myself to sleep, but it wasn’t far from the truth.

– One In A Million, Pet Shop Boys

When people don’t go to work or make their coffee run or stop at a newsstand to have some sense of normalcy around these parts, they might pick up a New York Post in the morning.  They may see the backpage as clear as day. 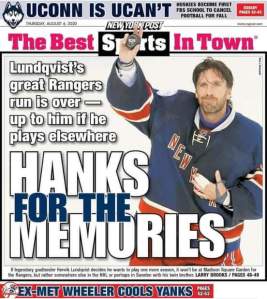 “HANKS for the Memories.”

Larry Brooks makes sense of what Henrik Lundqvist and the Rangers could do for their mutual futures.  But the writing was on the wall for a long time, at least as long as the “regular” regular season was, and much like the youth movement that made Henrik Lundqvist a star and legend for the Rangers, he would no longer be part of their future.

In 2014, I made it a point to incorporate Pet Shop Boys’ song titles in my posts.  They may not mean much to my two readers, but they have a special place for me. So my blog, my rules, all right?

I never was able to incorporate the song “One In A Million.”  But it appeared I was saving it for Henrik Lundqvist all along.

I wasn’t around for Rod Gilbert.  Eddie Giacomin was long gone by the time I ended up a Rangers fan.  I was able to see Brian Leetch, a home grown Ranger, in his prime, and for that I am eternally grateful.  I got to see Mark Messier, widely regarded as an all-time hockey great, wear a Rangers jersey and bring a Cup to this long suffering fanbase.

But Henrik Lundqvist, man.  I’ll never see another player like him in any sport across any city in my lifetime.

He truly is one a kind.  One in a million, if you will.

I hope that whatever happens, he gets what he deserves: a chance to skate around the rink with the Cup of Lord Stanley.